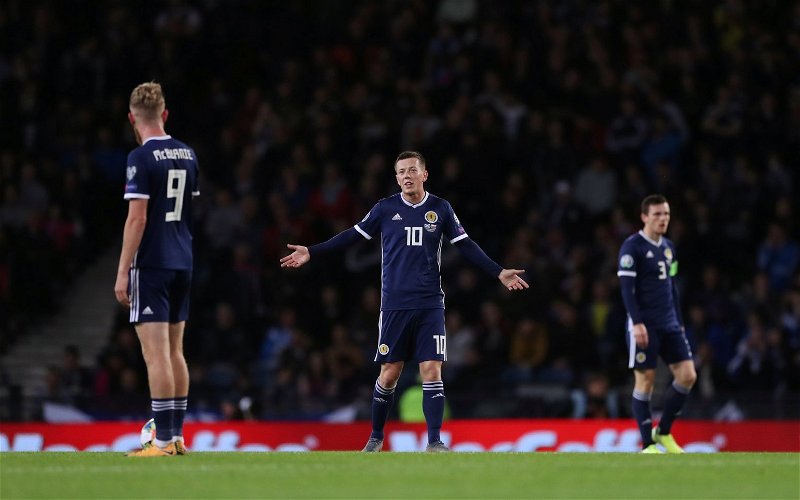 There is little question that Steve Clarke is a manager who plays favourites, and it seems that he just doesn’t rate too many players plying their trade in the SPFL.

If you play in England, even in the lower reaches, or somewhere abroad you are a favoured option. It can be the only reason for not selecting Ralston over Hickey, and for some of his other inexplicable choices.

Tonight he fielded the wrong team, playing into the recent tendency of sides to play with too many holding midfielders and allowing the opposition to have the bulk of the possession instead of going on the front foot.

There is no point in having two strikers on the pitch if you play a lightweight like Gilmour (anonymous tonight, an example of his playing favourites) behind them and then don’t get him, or them, the ball.

This is similar to the dreadful style of football that got Ibrox to its European final.

It is nearly identical to that which Hearts played against them in the Scottish Cup. In Seville, I thought they were pegged back for long spells. Hearts couldn’t even get out of their own half to muster a shot on target.

Against a quality team – and Ukraine were quality tonight – that invites disaster and disaster duly arrived.

They were 2-0 up before he changed anything.

From one extreme he went to the other; throwing on attacking players and losing some of the midfield steel. There was no balance to either system, which is why towards the end we were caught on the counter again and again.

And what in God’s name was he doing trying to bring on John Souttar in injury time, when Scotland was chasing a goal? We knew the Ukrainians would try to run down the clock; why in the Hell the Scotland manager volunteered to do so will baffle me a long time.

He scored the goal and prevented what would have been a killer third at a time when we were trying to claw our way back into it.

Everything we tried to do was down the left, because we were as weak as piss on the right, a consequence of playing a left back in a right wing back position instead of picking one of the form players from the season just past, just one of Clarke’s irredeemably bad decisions tonight.

Scotland is out of the World Cup.

The small crumb of comfort I take from that is that Callum will be spared yet another summer without rest, and so too will the other Celtic players it might have been the manager’s decision to call up.

A timid, weak, even cowardly performance in a game we had to win ends predictably in a defeat.

Clarke gets a lot of praise, and he deserves it in some ways, but he I struggle to see how he’s really made this Scotland team that much better over the course of his time as manager.

Part of that is personnel; when Lyndon Dykes is still a first pick that’s a sign of the paucity of talent as his disposal, but really … that was tactically clueless at the worst possible time.

At least the Celtic captain did his bit.