Ibrox’s Bling January Signing Got Exactly What He Wanted From The Move There. 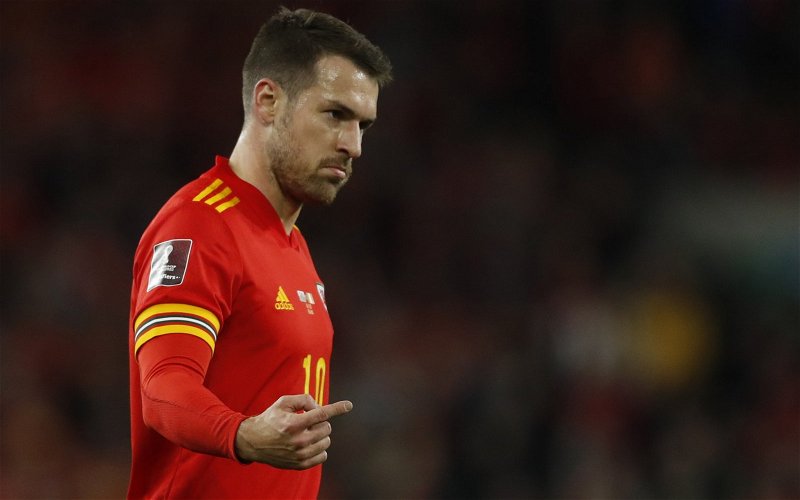 I don’t know whether history would look different if Aaron Ramsey had given a hoot about the Ibrox club, but I doubt it. He’s just not as good a footballer as all the hype suggested.

But that he was half-hearted in his pursuit of “glory” there is not really in doubt.

There were two things he wanted from that move; to continue getting paid a ridiculous sum of money for doing not very much for whichever club team was unlucky enough to have him on the books, and to get himself fit for the World Cup qualifier that he played for 90 minutes in today and which took Wales to the Qatari finals.

It was one of the most predictable things about that loan, and one of the things we highlighted early on.

A guy with that goal was never going to come to Scotland and throw himself wholeheartedly into blood and thunder football as a short-time expensive part-timer when it was all that he really cared about. A guy like this, he had no loyalty to Juventus and less than that for the daft sods who thought he was worth a £2 million loan fee.

Loyalty to the national team, and to that World Cup Finals goal … oh yes.

He used Ibrox to get himself fit, that’s the long and short of it. Whatever team is daft enough to take a punt on him – there will be plenty of offers I’m sure – he is exactly where he wants to be.

Leading the Welsh into that tournament.

Their performance today was vastly better than we saw from Scotland in midweek, so much so that I wonder if we’d really have fared any better against Gareth Bale et al than the Ukrainians did this afternoon.

They looked committed, full-throated in their determination to get something, and in the world-class winger they have a player capable of lighting up any stage. His free kick wasn’t going in, and he got lucky, but it’s the sort of moment that he was on the pitch for and he didn’t disappoint the home fans when he stepped up and hit it.

Maybe that’s the difference between them and Scotland; that one individual capable of producing something that no other player on the pitch can, but as good as he was and as effective as his contribution was, they just looked far better organised than Scotland did, and they defended well and their keeper produced some outstanding saves.

They looked like a unit and that’s how they played. What a contrast.

Ramsey was not brilliant, but nor was he as anonymous as he looked whenever he had a blue Ibrox shirt on. It’s clear that he was there to get himself ready for games like that, that he didn’t take the role there seriously.

That was reflected in his infamous penalty.

Congratulations to Wales and commiserations to the Ukrainian team who I think most neutrals had wanted to see do it.

Today they were beaten by a team that, incredibly, just seemed to want it more.

The guy wearing their number 10 hasn’t really wanted anything else in a while.