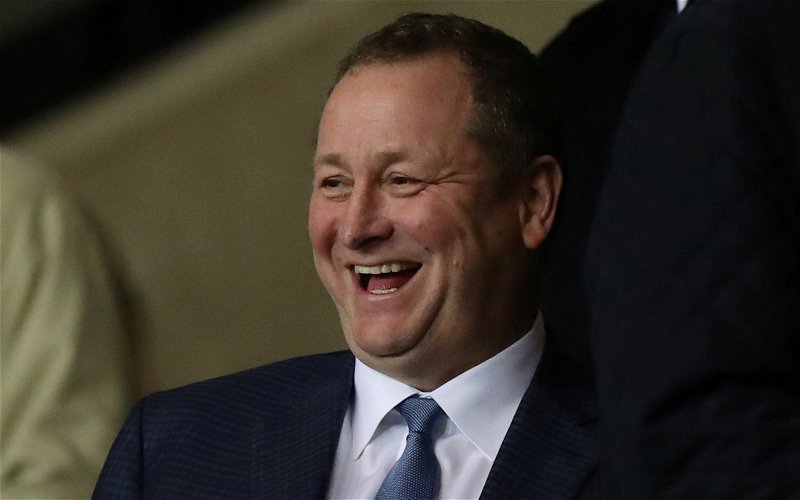 This time last year, Castore signed up with Newcastle United.

This week, their new strip was “leaked” first on an Ashley owned company website.

Does that sound familiar? Of course it does.

Their fans are asking why that strip – which isn’t publicly available yet – is somehow being advertised by Sports Direct before it’s available in their own club shops.

They’re also wondering what the link is between Ashley and Castore.

In the same month that Ibrox’s strips appeared on an Ashley site before they were released, and in which their “official club partner” sites were quick to assure fans that there was nothing there to see, Newcastle fans have sussed that this is strange and they have started asking the questions Ibrox fans have yet to ask.

These sites have been saying from the moment Castore inked the deal with Ibrox that Ashley’s fingerprints were all over it.

Even if the evidence is circumstantial, there is enough of it to make a compelling case.

Phil Mac Giolla Bhain has been talking about this from almost day one … two years ago now.

It has taken Newcastle fans half that time to start doing what Ibrox’s fans refuse to … putting two and two together.

I love Ibrox fan media and their relationship with the club.

It’s the very definition of an abusive one.

“Pay us £25,000 and we’ll tell you what you can write” is the long and short of it, and after doing so they have convinced themselves that the club respects them and that it plays straight when it’s talking to them.

These people are absolute mugs.

You can already see that there’s a deficit of intellect there.

Celtic gives the same deal to our bloggers only for free, and I have not heard of a single case where the invites and offers and access have been restricted on the basis that club doesn’t like their output.

I should know. I’d be first in the queue if the club was revoking access on that basis … but they hold nothing over any of our heads. They don’t demand fealty far less cold hard cash.

Our media leaves a lot to be desired, and I cannot believe that any outlet actually paid that cash up front although I know that several of them did. But for fan media to pay it … that’s in some ways even more incredible.

That the club routinely bullshits them should come as no surprise.

But I am amazed anyone swallowed the latest Ashley fiction.

The thing is, some of their sites have now started to put two and two together, but only because the Newcastle fans got there first. Their “official media partners” might treat the fan-base like fools, but that’s only because so many of them are.

It took the Geordies a mere twelve months to suss this out and begin poking holes in the facade.

Fair play to them.

Celtic’s title win last season is the first of many under Ange. Read the Ten Reasons why we’ll retain the title next season.