The Juranovic Non-Story Is A Textbook Example of Speculation Trending As News. I see there’s some consternation on social media tonight about what is nothing but a throwaway tweet by “respected” journalist Fabrizio Romano.

This guy has 8 million Twitter followers, so he’s not some eejit without a brain in his head being retweeted by other eejits without brains in their heads. But tonight’s Juranovic tweet is … nonsensical. 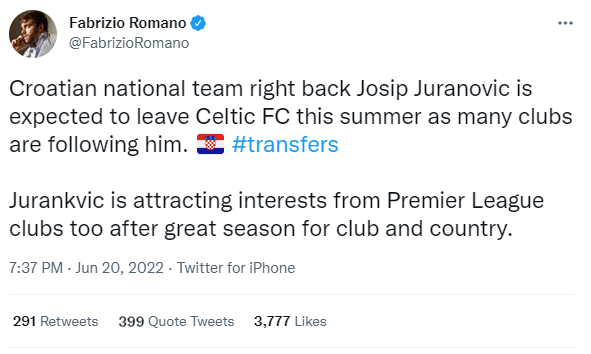 Look at that would you? It raises more questions than it offers answers.

First, what’s the source of that highly speculative claim?

Expected to leave by who exactly?

The player? His agents?

Neither has intimated any such thing.

Celtic? I very much doubt it.

There is zero prospect of our club willingly letting go a player who is just in the door and especially one Ange values so highly, unless the price tag was obscene which it would need to be.

Secondly, who are these clubs?

You’ll notice that there is not one word, not one piece of actual information, in that tweet.

It’s kite-flying and I don’t care how many Twitter followers that guy has … if he’s going to post something like that it needs to be backed up by something and this isn’t backed up by a single thing that I can see.

It is speculation from an unidentified source and one which runs counter to what the player has publicly said.

Honestly, if that tweet contained a scrap of actual hard info, if it was from a specific source, if it didn’t read like something posted just to get a reaction – how do you think someone, anyone, gets 8 million followers on Twitter in the first place? – I might be inclined to take it seriously.

But why should I when it contains only one verifiable fact, that he had an excellent season for club and for country?

That’s the only thing in that tweet which is grounded in reality and so please, people stop sending it to me and expecting a reaction other than the laughing faces I’ve already posted on the original.

It is a textbook non-story.

And I do not need to wait for Big Ange to confirm that before I treat it like one.