Mad Dog Slipped The Leash Again Today. He Is The Ibrox Problem That Won’t Go Away. 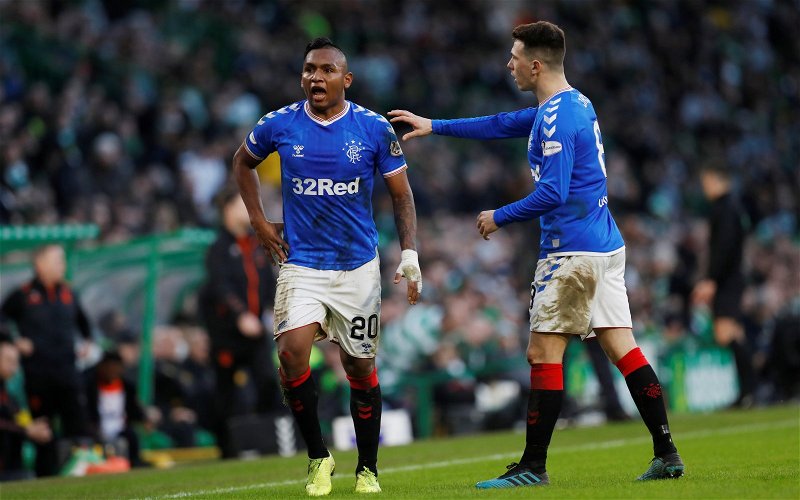 Overweight, over-excitable, prone to weird and not so wonderful off-field dalliances which hint at difficulty regulating his behaviour and still to sign a contract extension for his club.

This is a guy who is lauded by their fan-base in spite of never scoring twenty goals in an SPL campaign since arriving five years ago. He has been linked with a move in every window, for big money, and not one serious offer has ever transpired. Even now, with his contract running down, nobody seems interested in him.

When Kris Boyd is calling you overweight, that’s pretty bad.

When your own captain is talking to the media and ripping you to pieces, that’s worse.

Morelos is now scorned by some in his own dressing room, and amongst the Ibrox support. Combine that with Kent arguing with the manager, whilst the cameras watched, in the first half today … that’s trouble.

But then he’s always been trouble.

Mad Dog isn’t called that on this site for nothing.

I’ve written enough about him not to be in the least bit surprised by that act of thuggery today.

Morelos is one of those players who no team should ever feel entirely comfortable putting out on the field. If an opposing player has a dig at him early he forgets that he’s on the pitch to play football and starts going around looking for scores to settle.

He came on today with that mind-set, obviously tiring of the bench and unable to believe that the manager prefers someone else to him. His frustration was evident.

Within minutes he was having a wee fly kick at a Hibs player.

The explosion was coming when he got away with that.

He gets away with this stuff so often now that he probably didn’t honestly expect the card for it, but Collum likes to be the centre of attention and didn’t even hesitate.

But no ref would have allowed that.

No ref would have allowed such yobbish behaviour from a player with a long record of previous lunacy.

Mad Dog can’t be trusted on the pitch because you never know when these detonations are going to happen … he scores goals, yes, some of the time, but he also gives you a level of risk.

The red card also increases the chances that Morelos himself might not want to stay in this league where he must constantly feel like he’s targeted; that’s another trait of the anti-social personality, a strong sense that no matter how badly they behave that they are the ones being picked on. I am sure he does feel like the victim.

None of it helps his club. Morelos is a problem they can’t easily solve.

If he stays and signs a new deal there will be more days like today. If he stays and doesn’t, he will gurn and gripe and fight and claw his way through his final year, unless they bench him completely.

But what kind of fee can they expect from a little fat guy who wants to fight with everybody?

Morelos is becoming better known for his early use of the carbolic soap than he is for scoring goals.

Who the Hell wants to spend big money on that?