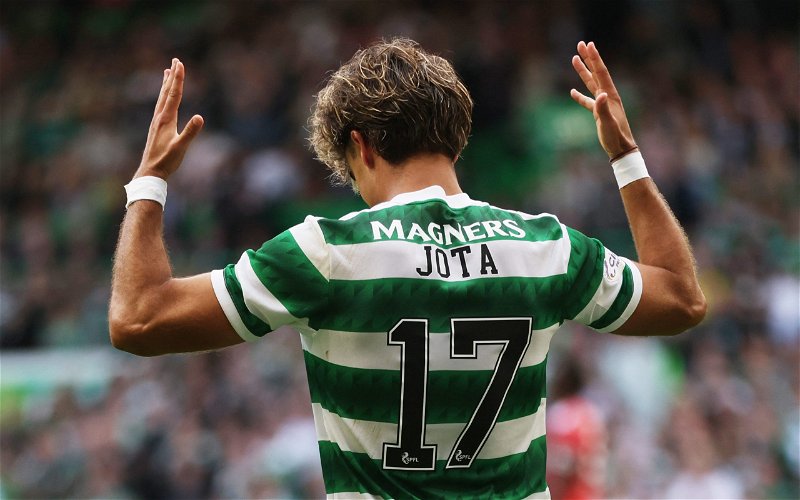 When I saw that Sky Sports had produced their Goal Of The Month reel, I thought about the weekend and Kyogo’s beauty and I reckoned that nothing was going to top that for sheer execution and skill.

Then I re-watched Jota’s goal against Aberdeen and his strike against St Johnstone from 30 yards out.

Wow. Those are better goals.

To top it off, we’ve got the over-head kicks from Giakoumakis and Jenz in there as well. I think there was an argument for Abada’s chip at the weekend and a couple of our others in addition, but five goals of ours in that selection is very decent.

Jota’s two are exceptional. The one against Aberdeen, where he goes on the mazy run and then cracks it, is probably the one that edges it for me, although his long-ranger effort is a beauty. Kyogo’s goal is exceptional in the technical skill he shows to hit it, and the way it came right out of the blue. It’s the kind of goal that the truly great players get.

To have two over-heads kicks not even really in the running for the best of the bunch (and both in the same game, where we also had that Jota slammer, which is quite incredible) tells how strong the other three strikes are.

This is the mark of our firepower.

When you look at the sheer number of goals we’ve scored already, it’s probably not a surprise that so many of our strikes are included on the July-August highlight package, but it should still send out a warning to the rest about how good our front men are.

Between goals of the month, players of the month, the certainty that Ange will be named Manager of the Month and all the rest of it, it shows that even this early we’re going to sweep the boards.

The rest better get used to this stuff.