Scottish football has to be the only place which treats its discredited jokes as if they are national figures worth paying attention to.

Steve Conroy quit refereeing after the SFA punished him for a decision in favour of the first Ibrox club that was so bad even they didn’t try to defend it. Think on that for a moment.

He gave a decision for Rangers that was so egregious not even the SFA was prepared to ignore its implications He was relegated to cover lower league football. 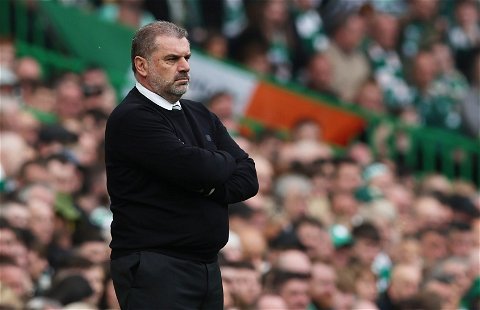 Ange’s Compassion For Other Managers Is Why So Many Of Them Love The Celtic Boss.

Yet he is one of the go-to guys when it comes to commenting on issues relating to their standards and practices. And today he’s dredging up some ancient history by pointing the finger at us for being responsible for the notorious referees strike of 2010.

Nearly everything that he has said today is blatantly at odds with the facts.

I would go as far as to say that it was fundamentally dishonest. He has done what others did at the time, and pointed the finger at Celtic. But we were a useful scapegoat for what was actually going on at that time, which is that refs and their bosses were at loggerheads over money.

To put it in plain and simple terms, they wanted a wage rise and they used comments from Celtic as a pretext to go on strike in order to force the SFA to negotiate with them on that issue.

They think we’re all possessed of short memories, but we aren’t.

This tracks back to the notorious decision by Dougie McDonald to award us a penalty at Tannadice and then to change his mind after his linesman intervened. That scandal ran for weeks, and in the process both men admitted that they had “worked on their statements” about it – in short, they lied and they were caught lying to our club.

Celtic raised 99 kinds of Hell over that, and ever since we’ve been accused of stoking the flames of what happened next. It is garbage, I’m afraid. We were apparently supposed to remain silent whilst we were effectively cheated, that’s what it comes down to.

Conroy has sought to dress this up as paranoia on our part.

“Dougie didn’t help and he played into the hands of Mr Lennon and we just strengthened the idea that there was a vendetta against Celtic and everything they were saying about us was correct,” he said.

Everything were saying at that time was correct though.

We said that we had been treated unfairly over that situation and would not accept officials lying to our club. So what exactly did we do except to confront the issue based on the facts?

That entire episode has damaged the game, but not in the way that Conroy alleges or seems to think. What happened in the aftermath is that refs used the strike to get more money and to attain a level of security from scrutiny which no other officials in Europe have. You cannot question referee decisions in Scotland without disciplinary sanction.

They don’t have to explain why they made those calls.

They are a protected species in a multi-million-pound industry where their calls can get people sacked, and that’s a carryover from those events. Conroy himself was highly regarded in the sport because he was happy to talk to the press and to the clubs themselves about the decisions he made, and that’s part of why his comments today are just plain wrong.

I don’t know what he thinks he’s doing bringing Lennon into this either, and insinuating that the reason we kicked up a fuss was some kind of distraction from bad results.

Lennon was not long in the job, and didn’t need to blow smoke to cover himself or the club. Perhaps Conroy thinks he can attack Lennon with impunity because he’s not exactly popular with our supporters, but right is right and fair is fair and Conroy is re-writing history at best here, and at worst playing ring and run because he thinks Lennon won’t be able to respond.

I would not put money on that if I was him.

Lennon might very well respond to this nonsense, and he would be entirely correct to do so.

Celtic wasn’t the reason for the referees strike of 2010.

We were the excuse.

Refs didn’t want to have to explain their decisions and they wanted more money, it’s a simple as that, and in spite of the SFA proving that foreign refs would do the job just as well if not better the officials got their pay rise and the other changes they wanted.

And let’s not forget either than in the midst of it all their boss was caught sending sectarian emails and told Stewart Regan that he could get the strike called off if it meant keeping his job.

The whole culture amongst referees reeked from the top down but they were able to present themselves as the victims and get sweet new deals in the process.

We rejected the slander at the time, and we reject it now.

Conroy is pushing a fantasy here, and one that resulted in long-term damage to the game, damage that continues to be done, because if refs don’t need to explain decisions and if you’re not allowed to be critical of them that introduces all manner of dark possibilities for duplicitous behaviour.

Those doors were thrown open wide by the 2010 strike and the results of it. Conroy thinks things are better than they were, and certainly for some folk they are.

But the landscape of Scottish football has never been more inviting for cheating and corruption.