Celtic’s Form Is Not Built On Our Alleged “Contempt” For The Domestic Opposition. 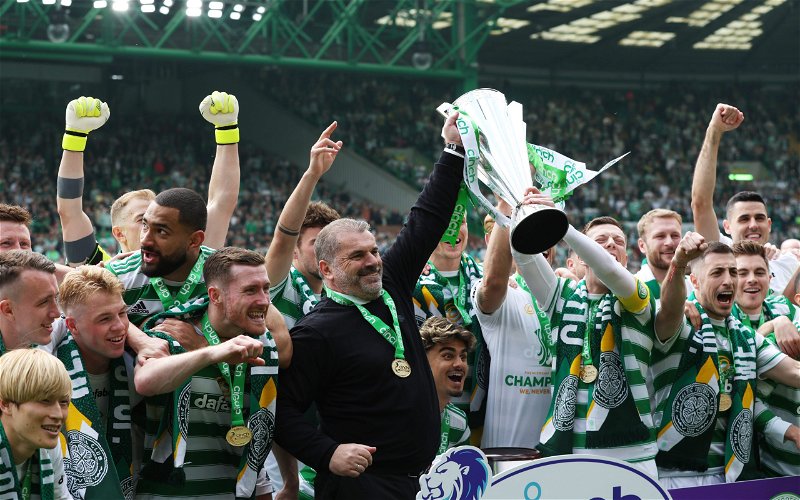 There is a theme that has gained common currency on the Ibrox fan forums that they have built a team for Europe which treats domestic opposition with too much respect and that Celtic has built a team based on treating the clubs here at home with nothing but contempt, whilst we get “found out” on the bigger stage of Europe.

Both strands of this theory are manifestly nonsensical, and encourage delusional thinking.

The truth is actually quite the opposite.

It is Ibrox, engorged on its own ridiculous conceit that they are now amongst the respected and feared clubs of Europe, which treats the domestic competition with condescension and contempt.

Our success is actually built on doing the complete opposite; we have the utmost regard for the teams we play here at home, and this is why yesterday made it 38 league games – a full campaign – without defeat.

Listen to Ange when he talks about our domestic opponents. Christ, there is an example of this from Wednesday night when Rob McLean asked him the ridiculous question about whether he had rotated the team “thinking about the weekend.”

Ange snapped back, “No I was thinking about tonight.”

Ange knows that complacency and the arrogance of believing you only need to show up and win is sometimes the biggest reason why there are shocks. That kind of thinking is bad for a team and he won’t have any of it. He wants our players to be focussed going into every match. He is aware that there is dangerous in any fixture.

This is why he emphasises, over and over again, the taking of chances when they come your way.

It’s why some of his most frustrated press conferences have taken place against the backdrop not of dropped points but of narrow victories; he knows that on another day those games could have gone against us, although the matches should have been out of sight.

The performances of the team against the likes of Dundee Utd do not reek of contempt, but of an understanding that every team is capable of hurting you unless you keep a foot on their throat.

This is why the mantra of “we don’t stop” is the key to our success story.

It is our respect for the domestic opposition which led to us rebuilding this squad in the way that we have.

We know that to compete on several different fronts requires that we don’t see any real reduction in quality when we have to rotate; that is treating our fellow Scottish clubs with real respect, and recognising the need for depth and quality in every position.

We are not, to be blunt, the club throwing a team together and assuming that because they paid higher values that other Scottish teams can afford that they just need to assemble them into a formation and turn up to get results.

That is where the real contempt lies.