Who In Gods Name Is The Scottish Express’s Latest Idiotic Pro-Ibrox Story For? 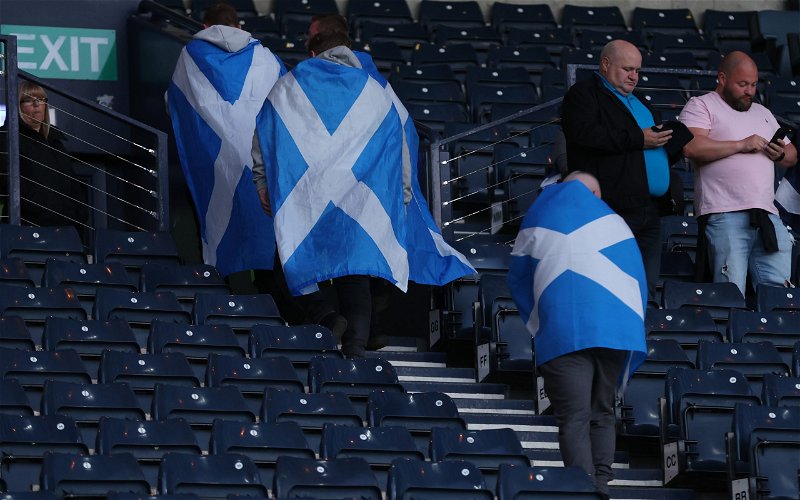 There is something deeply wrong with those who work at The Daily Express, and this has been true for as long as I’ve been able to choose not to read it too often.

I do glance at it briefly, but only for my own personal amusement.

I’ve had a good laugh at the Express a lot down through the years as its content is easy to get humour from.

Aside from their website having a peculiar fascination for end of the world stories it is also closer than Britain has, even accounting for The Daily Mail, to a true Fox, political right wing style bat-shit outlet.

I am not even exaggerating when I say that.

Mostly it is negative stories about Celtic and our fans, and the occasional toe-curling piece of trash like the one which the writer of the piece I want to talk about – and I’m not naming him, that would give him credit he doesn’t deserve – wrote where he said that Ibrox’s love for the Queen was “reciprocated” based on the clownish Ibrox supporting MP Ian Davidson saying he saw a team photo hanging up in Buckingham Palace ten years ago whilst he was on a tour there.

Ten years ago Ian Davidson claimed he saw an Ibrox team photo up in Buckingham Palace.

Whilst he was on a tour.

Of what? The Queen’s private quarters?

I don’t think they do tours of that.

I don’t think they do tours of anywhere in the palace where she’d ever set foot. Still, this was enough to make Davidson’s heart swell with pride, and that was enough for an online hack to conclude that she was a big fan.

Yes, these people give full meaning to the word halfwit.

That’s the kind of story you get in The Daily Express; stuff so reeking that Joel Sked of The Scotsman ignores it and even The Daily Record won’t run with it.

Tonight’s is a beauty. It claims – before promptly offering a slab of contradictory evidence – that the majority of the Tartan Army are actually Ibrox fans.

Yes, you read that correctly. The Tartan Army is made up, primarily, of fans of the unionist club whose supporter’s forums buzz with hatred of their country and the party which has been its elected government for roughly fifteen years.

Along with a guy called Iain Emerson, I was an editor and publisher of the Tartan Army Magazine for a couple of years.

Iain, who is a good friend of mine, still runs it to this day and I’ve interviewed and met dozens of members and I can count off the top of my head a mere handful who had anything to say about Ibrox which didn’t end in a curse of some description.

What I did meet were loads and loads of Hibs and Hearts and Aberdeen and St Johnstone fans and those of so-called provincial clubs.

Being a Scotland supporter is simply not compatible with the modern Ibrox fan, and that’s been true since Murray started all his Britishness Days and “the team of the troops” cobblers and all the rest of it.

There are undoubtedly exceptions.

The Ibrox forums have their small coterie of Scotland fans, and even SNP voters, but they are shouted down by an overwhelming majority who believe that the game in this country did them wrong and that Hampden was at the centre of it.

A lot of Celtic fans, by the way, won’t support Scotland out of the recognition that the SFA screwed us over in relation to stuff like the title stripping and The Survival Lie.

What I’m moved to wonder is who exactly is the intended audience for an article dripping with such inane drivel? Who is that supposed to appeal to? It’s not based on any published statistics – the writer got it off Twitter and nobody has clarified what kind of study was done to back it up – and seems far-fetched if we’re being generous.

Tartan Army members won’t care. Celtic fans who’ve dipped a toe in the Ibrox forums will scorn the very suggestion. But not half as much as their fans will, since the very idea would make a lot of them physically sick.

As I say, it is a badly sourced, unverified piece of nonsense … a bit like Ian Davidson’s clocking a photo of an Ibrox team hanging on a palace wall.

It’s so out there that it stretches it even for the outlet which his publishing it, and they have a headline on their site which reads, “Barmy EU lawmakers hold summit to discuss a meat-free ‘vegan future’ for Europe.”

I rest my case.