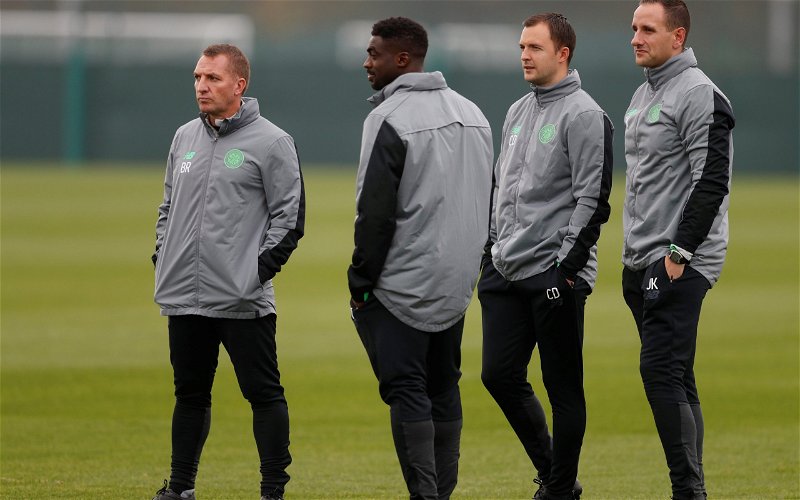 Regular readers will know that it’s my considered opinion that Ibrox has lived in the shadow of mad fantasy and unreality for a long time now. When their fans or their board or their favourite pundits are trying to analyse something they do it in a manner more akin to how politicians spin things than with a scientific method built on solid foundations.

This leads to mistakes. Sometimes small ones, with only modest effects. Sometimes to larger problems, and occasionally catastrophic ones.

I believe their latest mistake is potentially serious. They have bought into the crazy idea that Steven Gerrard was only a showy frontman, and that the “brains of the operation” was in Michael Beale. In short, they think they’re getting the benefits of Gerrard’s management style without him. That those “benefits” were dubious in the first place is only half important here.

Where did this barmy idea come from? Last night my old man joked that Belgium haven’t been the same since Shaun Maloney left his job; it’s true, but isn’t there a significant risk here? The Latin phrase Post Hoc Ergo Propter Hoc comes to mind.

It means “after it, therefore because of it.” It’s an example of faulty thinking, what’s literally called Post Hoc fallacy.

It assumes that because one thing happened after something else that the second thing was caused by the first. Belgium’s loss of form was not caused by the departure of Shaun Maloney. Anyone concluding that it was might fool themselves into imagining that it was him, not Roberto Martinez, who was the architect of their rise through the world rankings.

And that’s the crazy delusional that Ibrox fans have allowed themselves to stumble towards, with this assertion that it was Beale, not Gerrard, who made the trains run on time across the city. If their board genuinely believed that why didn’t they offer Beale the promotion when they were all preparing to leave in the first place?

There were some points during the Rodgers era where I heard Celtic fans suggest that perhaps the real brains of the operation was Chris Davies. I get where these ideas come from. There are a lot of organisations where the showy front-man is there to add a little glitz and glamour to proceedings whereas the real work is done by some diligent guy behind the scenes.

I am sure that these guys exist in football, but not at top clubs. Guys who are that smart – and what we’d effectively be saying is that Davies is a better coach than Rodgers – do tend to become bosses in their own right, and some of them, like Mourinho, have gone on to be exceptional at it. For the most part, the man out front is the man who brings success.

This is where Ibrox fans think they’re onto something with Beale. Because he has now stepped up to become a manager they think that their theory was right all along, that he was the real driver of the Gerrard era at the club. But this is another example of the Post Hoc fallacy. These guys worked as a team, in the same way Rodgers and Davies did.

This theory isn’t new. It stalked Brian Clough in those periods of his career where he didn’t have Peter Taylor with him. But Taylor’s time apart from Clough didn’t produce the sort of results one would expect if he had been the true genius all along.

Celtic fans never seriously entertained the idea that we could hire Davies and have Rodgers Lite. Our club certainly never considered it as possibility. But if we had, the theory would at least have been backed up by a period of unbelievable success.

What’s truly bizarre about the Ibrox fans embrace of this nuttiness is that they are ready to ascribe to Beale all the positive aspects and blame Gerrard for the negative ones. Which is ludicrous. As a team, their record was actually awful. Zero domestic cup competitions in six attempts. One league title in a year of exceptional circumstances.

People talked about European credibility being restored; the same management team presided over the Malmo debacle, where they lost the second leg at home playing against ten men. They were floundering in their Europa League group when Van Bronckhorst took over, swung it around and somehow made the final of that competition.