Celtic Lead At Half Time In Spite Of Two More VAR Shockers Against Us. 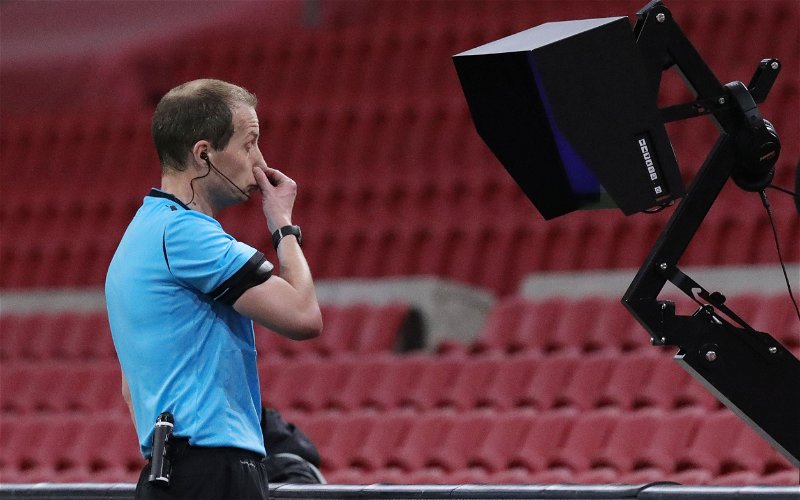 There is a belief that teams coming to Celtic Park get nothing. There was a belief that VAR would not change that, that the home team influence refs to give decisions in our favour and that the technology would only make matters worse. We would get calls for everything and we would give absolutely nothing away. That first half blows that out the water.

The penalty decision is disgusting. Sibbald could easily have been red-carded for his high assault on Giakoumakis. Neither of those decisions went Celtic’s way. To be frank, I’ve already started to wonder whether this is a grave, grave mistake.

The penalty is a shocker. If that’s a spot kick then everything that goes near a player’s arm in the box is a spot-kick and the penalty count quotient is about to go through the roof, with a lot of them falling against our club. That a ref can watch that several times, from different angles, and conclude that it’s a penalty – and a booking for God’s sake – is mind-bending.

Ange will be asked. Ange will give his answer where he only wants to talk about the game and we’ll all understand that, especially as we have refused to let the controversy break up our attacking rhythm. But serious questions already need to be asked about how decisions are going to be made with this thing. Too much is still left to the interpretations of people we have no real reason to trust. Over and over again we’ve made this point.

Refs need to be asked to give full, comprehensive explanations for these decisions and where they get them wrong they need to be censured by the governing body. Everyone makes mistakes, but some of these are glaring and obvious and that calls into question the idea that we’re watching mistakes at all. The pattern all runs one way right now.