Ex-Celt Represents His Country, And Family Name, With A World Cup Finals Goal. 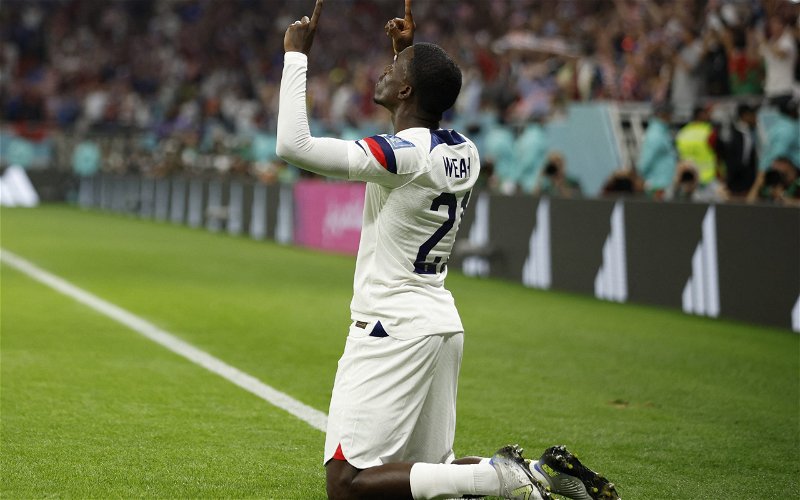 Timothy Weah will not be one of those names that will resonate throughout our history, but he was a good Celtic servant, albiet a brief one, and he helped us get a title over the line. That’s a big deal. That’s important. That’s a part of our club and a big part, as he contributed to the Quadruple Treble. That will not, it will never, be forgotten.

Unfortunately for him, it was not to be enough to win his team the three points. The Welsh were the better team in the second half and got a well deserved equaliser through a Gareth Bale penalty. But Weah did his country proud. And he did his family name proud.

One of the things the commentators said was that his father, the magnificent George Weah, is one of the best players never to have played in a World Cup. What a remarkable piece of intelligence that was. One of the finest players we’ve ever watched never got to a World Cup Finals? That’s almost too bizarre to be true, and yet it undoubtedly is.

Well, tonight his son did play at World Cup and he scored a goal. Timothy didn’t just represent us (in a sort of way), but his country and his family name. His dad has one legacy, the son is now putting the first touches to his. He’s only a young guy – he was at Parkhead when still just a highly rated teen, don’t forget – and is still only 22.

He has a Scottish league and cup double to his name. He has a CONCACAF runners up medal. Now he’s starring on the biggest international stage of all. We all wish the boy nothing but the best of everything. He was at Parkhead at brief time sure, but he’s one of us and tonight he did America, Celtic and his famous father proud.