Beale Denies Undermining Van Bronckhorst, But Only A Fool Would Believe That. 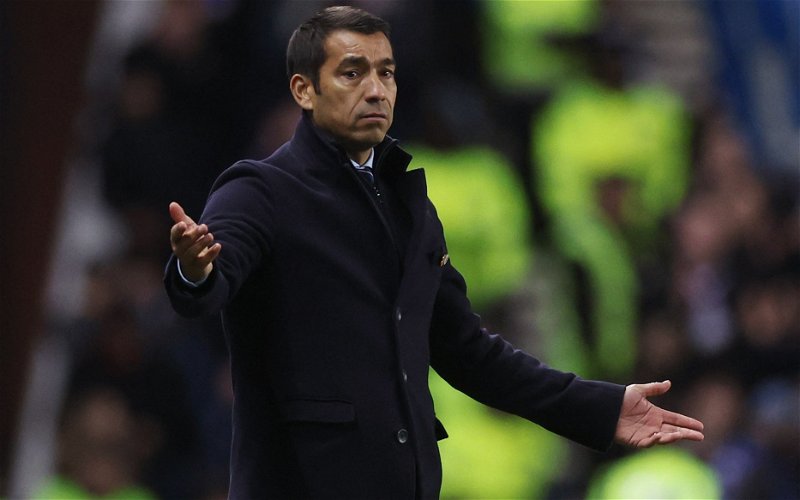 Here’s how it probably happened;

On the night of the Liverpool game at Ibrox, their directors realised that things were coming to a head. The second half collapse was so spectacular and unforgivable from the point of view of the fans in the ground that the board started to worry for the first time that things were on the brink of collapse. Was that when they started talking about a successor?

It was probably the moment when they started to consciously think about a plan.

A week later was the Dundee quarter final of the League Cup at Ibrox, where they beat the Championship team by a single goal and the players were booed off the park. Discussions would certainly have been had after that night.

Three days later, they drew with Livingston in the league. That would certainly have prompted feverish chatter in the board room. The call would have been made that day, or perhaps on the night when they lost to Napoli, putting them on the brink of a very unwanted Champions League record. Aberdeen was next up, and something had to give.

I think Beale knew of Ibrox’s interest on or about the time – on October 19 – that he spoke with Wolves. That would have been a week after the Liverpool rout. I think it’s the principle reason he turned down the approach from Molineux.

Had the Ibrox club dropped anything against Aberdeen on 29 October, I think Beale would have been offered the job there and then, but Van Bronckhorst was to deny him that.

It was obvious what Beale was doing there that day, and the optics of him sitting in a Ibrox fan bar lapping up the attention was so self-centred and egotistical that it was mind-blowing. I described him some weeks ago, when his predecessor was still hanging in there, as a one of the vultures circling a wounded, dying animal.

There is little doubt that he was fully aware that he was putting the man under pressure at the very least. It was a dire, shady, thing for a guy already in a job to do to another guy in a job. It was a gross insult to his employers and Van Bronckhorst as an employee with rights.

But the Dutchman got a win that day, and although the bad result against Ajax followed they were never going to sack him for losing to them.

I didn’t believe Van Bronckhorst would survive the St Johnstone result, but I reckon sacking him then and appointing Beale would have made what people were already surmising even more obvious, and so he got another week and another bad result.

I think Ibrox gave it seven more days just to put another bit of distance between Beale’s visit and his appointment, and then they started to spin out their little fiction.

That’s how I reckon it happened.

Here’s what I know absolutely positively did not happen;

They would have had to have known before then. A smart club would have been planning for that eventuality for weeks if not longer; the doing we gave them at Celtic Park was the first major warning but it was not the only one. We could all see it coming. Ibrox fan sites had been screaming about it. Nobody doubted how it was going to end.

I’ll tell you what else didn’t happen;

Ibrox certainly did not conduct a global managerial search, in a week, developing a shortlist, interviewing candidates and somehow keeping it all under wraps, just to arrive at the guy we all knew when it started that it was going to be … it’s almost funny how insulting to our collective intelligence that idea is.

We’re all told that he turned down Wolves.

Having done that and publicly pledged loyalty to QPR Ibrox had no reason to believe that he would not also turn them down, which would have forced them to do a real search on a much longer timeline.

But they knew his answer because the question had been put to him before Wolves even made the call, and he had probably given Ibrox an assurance that he would take their job. I wonder if the interest from Molyneux came as a shock. I wonder if he pondered breaking his word to Park and the others. Only he’ll know that for sure.

They approached him in spite of the Wolves debacle because they knew what he would say, because the discussions that mattered had been had already. He was invited to the Aberdeen game and either told to get himself noticed mixing with the fans or decided to do that off his own back, in order to create the right impression for when the “official” approach came.

I firmly believe that he stabbed Van Bronckhorst not in the back but in the front, and the Dutchman knew himself that his days were numbered, and since it was as obvious to even their supporters as it was to ours I bet more than a few of the players read into that the manager was no longer to be respected, or his views paid heed.

It might even be that it was Beale’s appearance that day which finally tipped a bad situation into a crisis situation in the dressing room. Football in Scotland is like a small town where everyone knows everyone else’s business. It certainly didn’t help their situation.

I always say that I don’t care who believes in fairies at the bottom of the garden; it is the right of every man and women to believe in whatever nonsense they like. But I draw the line at being forced to act as though their demented fantasy was real. I resent that we have a media here which does not call bullshit when it’s so obviously being shoved in our face.

Beale and Ibrox can trot out whatever fiction they like, but nobody believes it.

Not even the ever gullible supporters over there, who know a snake when they see it but are willing to tolerate lies and insults and disinformation because the man said “56.”

They do deserve everything that they get over there.