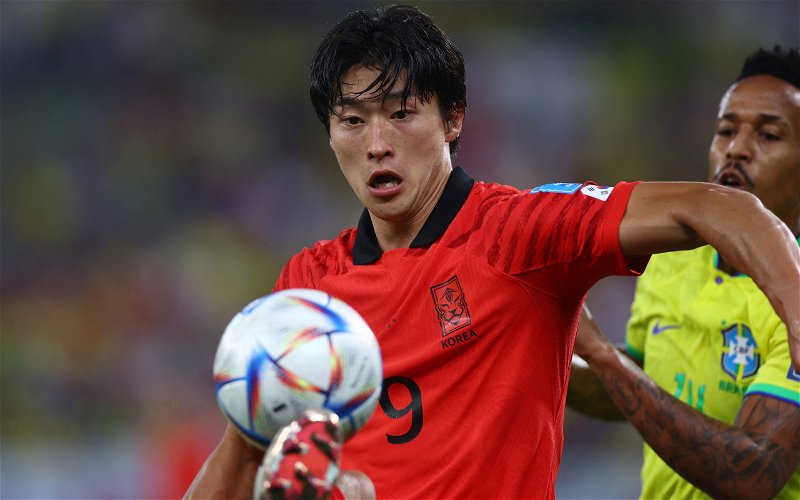 The “news” is full of stories about how “our move” for the South Korean striker Cho Gue-sung is currently “on hold.” This, of course, presupposes a couple of things and lets us get some ways ahead of ourselves. It presupposes that the interest is real.

Celtic has not commented on this in an any way, shape or form. There has been nothing from the club or even sources close to the club. What, for all we know, started out as a piece of heart lazy journalism is being taken for gospel truth.

I like the boy. I think he’s talented. He’s the sort of player we should be going for. But there’s zero proof that we have or that we will. There is nothing to indicate that we’re truly interested. I find it somewhat bizarre that we are told our “bid” has stalled when, in fact, some of the same reports say that there hasn’t even been one yet.

The Shocking Truth Is That Brexit Has Benefited Celtic In The Transfer Market.

Celtic Will Not Enter Into Any "Bidding Wars" When We're Confident In Plan B.

Korean Superstar “Finalising Transfer Move”, But Is That Move To Celtic?

Kyogo’s Attitude Is A Perfect Example Of Ange’s Philosophy For All His Celtic Signings.

I think, on balance, we’re probably sniffing around him. But I wouldn’t be shocked to learn that we have other options and he’s just one player in that position who we’re looking at just in case. I wrote yesterday about how Brexit has changed the way we conduct transfer business, and if we’re casting the net that wide he’s one player of several.

I also wrote a few days ago about how you can see, with Riley McGree and Matt O’Riley that our Plan B is often as good, these days, as our Plan A and so I don’t think any of us would necessarily be too concerned if the club lost out here.

Last year, and through the summer, it was evident that the media’s belief that it knew what we were doing in the transfer market was hugely misplaced. I don’t think they had a clue most of the time, and we surprised them again and again.

I wouldn’t be shocked if we did that in January, if the next big signing that this club made came out of the blue, and took everyone by surprise.