Kyogo Is Not Having His Best Spell In A Celtic Shirt. Still, He’s Scoring Big Goals. 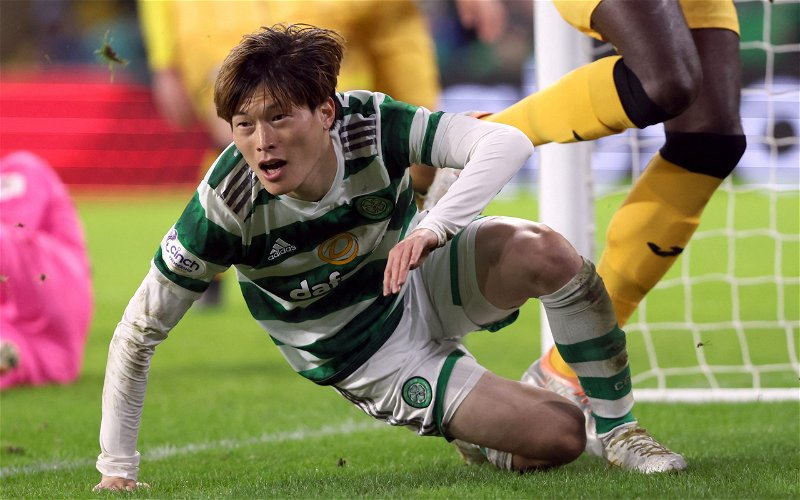 Last night was Kyogo’s 11th goal in the league; he’s now joint to scorer with Shankland, Miovski and the injured Croat at Ibrox. He also has one assist. His goals to minutes ratio is the best in the league but for that of James Forrest. Those are the facts.

But the little guy doesn’t look himself at the moment, and although he’s still putting the ball in the net and scoring big, big goals there’s something missing from the way he’s playing, and listening to Ange after the game – more on this later – you get the feeling he thinks that there is more, much more, to come from the player and from the team.

It’s hard not to feel bad for the guy.

He still sets incredibly high standards, and the fans expectations for him are sky high. But you can look at those numbers and ignore a very real issue, or you can look at them and wonder what might be instead.

Because if Kyogo gets back to where he was last season, when he was on sensational form and looked to be the deadliest player we’ve had since Larsson, there really will be no stopping the guy.

That’s a fact too, and it is why it’s tough to watch right now.

It’s hard to put your finger on what’s not working.

He’s being more closely marked than when he arrived in the country, but he previously looked sharper and more capable of getting away from those surrounding him.

And yet last night, he did manage to do it for that one crucial second, the second that made the difference and put the three points in the bag. That’s what good strikers do, and there is no doubt that Kyogo fits into that category.

But Ange’s frustration after the game was obvious, and it was understandable.

We are failing, right now, to do what came so easily earlier in the season; we just aren’t killing teams off, and although Livingston got a huge dose of luck (and some help from their ‘friends’ in our third being ruled out) we could have been six up by half time and yet they were still in it right to the end.

Kyogo is not the only one to blame for that, and his contribution is clear when you look at the hard numbers. Everyone in the forward line will need to share the responsibility and the burden.

The sooner this boy is back to his lethal best the better.