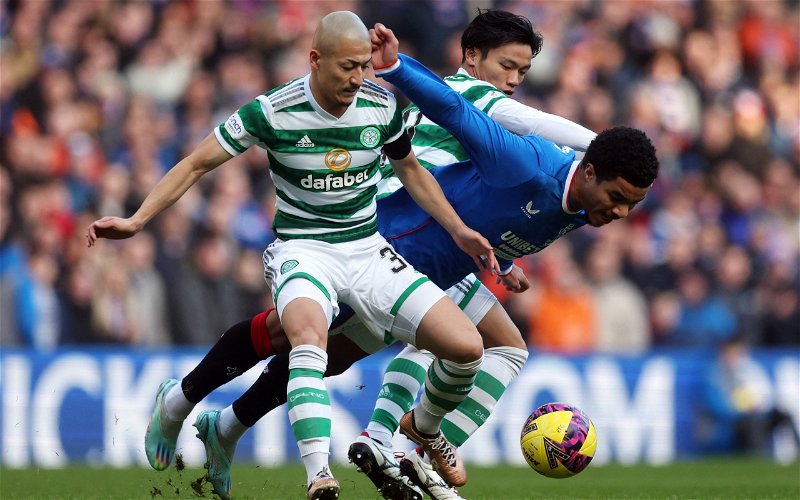 James McFadden was asked at the weekend about stories linking Daizen Maeda with Southampton and he went out of his way to say … nothing at all. I’m not saying that he didn’t give an answer, just that the answer he gave was so vague he might as well not have bothered.

Not that his lack of any newsworthy statement stopped the media.

This is the preposterous take Football Scotland, The Record’s sister paper, had on it.

“James McFadden admits every Celtic player has a price and he would not be surprised to see Daizen Maeda leave this month.”

Which sounds as if McFadden has been playing that familiar game; I’ve not had my name in the papers for a while, so let’s comment on Celtic selling all their stars and that will get me some ink. But in fact, it was not that at all and McFadden’s actual comments have been twisted every which way for them to come up with that shady piece of reportage.

I always love the word “admits” in these pieces. It’s as if he reluctantly gave up the information as though under torture. “Oh he didn’t want to admit it … but in the end he did.” Doubtless some in the media used to have the proverbial “ways of making you talk” but in the modern age they don’t even need to bother buy their sources drinks.

They just re-interpret their words any damned way they please.

This is what McFadden actually did say, when he was asked, on Sky Sports, about the prospect of Maeda making a move to Southampton.

“It depends what the offer is. I would never be surprised about any player leaving a club when there are millions involved. Maeda’s World Cup was really good and his form has been excellent since he’s come back. But Celtic are more than covered in every position on the park. I think he’s shown an unbelievable attitude but I would not be surprised if any player left any club.”

That’s miles from what Mark Hendry has written up in his latest piece of slop.

He was talking in general terms, not about Celtic specifically, as his words make clear. Hendry’s interpretation is a dire journalistic trick which is more akin to making stuff up than accurately reporting facts.

McFadden’s right that if some club offers insane money then no sane club in our position – playing in the SPFL with limited means – could possibly turn it down but that’s not a news story, that’s an accepted fact, as McFadden is pointing out, with every club in every league in the land.

Honestly, you really do go sick and tired of reading this kind of thing. Not even actual news but the invention of news, the manufacturing of stories where there otherwise aren’t any. McFadden said nothing whatsoever here to merit the headlines his comments are getting and if I was him I might even be a bit pissed off with how they are being spun.