Let All The Bitching Over Celtic’s “Penalty Escape” Cease After Today’s One At Hampden. 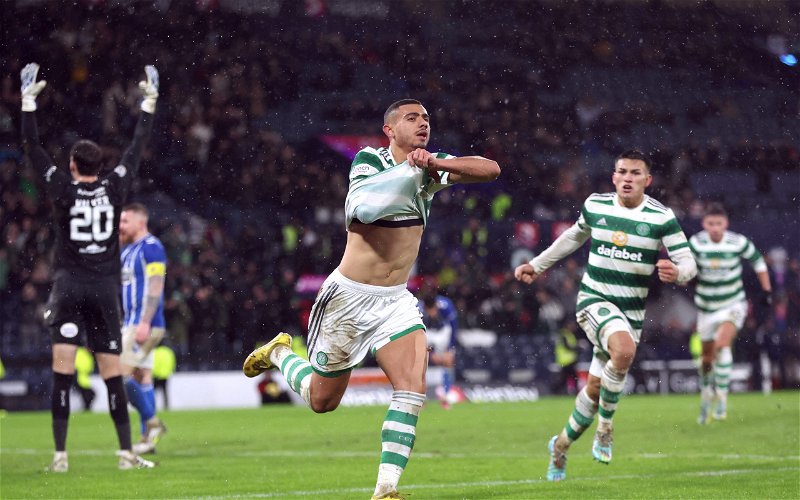 Having now watched the Giakoumakis incident, and having seen Ben Davies do pretty much the exact same thing at Hampden today to Liam Scales, I trust that the bubbling, whingers are now going to cease with their nonsensical yammering.

The two incidents are virtually identical.

If one was a penalty, then so was the other.

I think any player who is grabbing at another in the box is taking his chances, but if you’re going to be giving spot-kicks for all of them then there will be a half dozen per game.

Nobody at Aberdeen is doing half the bitching and moaning that McInnes did yesterday and as far as I can tell nobody in the media wants to talk about it at all.

The BBC match report – the writer of which had Ryan Kent as man of the match – would rather ask whether an almost innocuous Ross McCrorie challenge should have resulted in another red card.

Yet I’ll bet you that every one of them is going to be banging out about Giakoumakis and his “challenge” for the next week at least and probably a lot longer.

There is no discernible difference the two incidents except that only one has gotten attention.

And of course, it’s not even the worst decision from today’s game … that was the failure to take a look at what Ryan Kent did late on, but perhaps that came during the spell when VAR was conveniently out.

Of course, TV pictures can be used by the SFA … but will they be?

As I said last night when I came in from the game, “Celtic haters start your engines.”

It doesn’t matter how utterly absurd or divorced from reality the moaning is, the first time any sort of controversial decision went our way it was going to start.

But after today, I really don’t want to hear any more of it.

It was amusing last night just to see the veins sticking out of Derek McInnes’ neck and to realise the meltdown on the Ibrox fan forums … tonight it’s just tiresome and biased and I would prefer that if these people cannot be consistent that they should just shut up instead.