Old Friends And New Ones Bleeding Sevco Fans Of Every Last Bean. 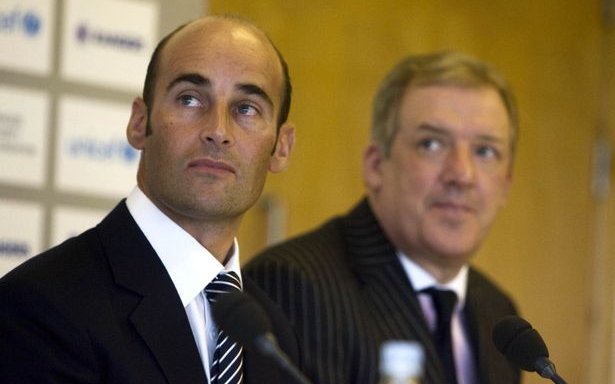 When Sevco enters administration – and I know some of you, like me, are counting the minutes, there will be much talk in the newspapers of the sacrifices that have been made by the club and in particular by those on the board.

We’ll hear how they supported the club through the bad times and took absolutely nothing in return.

For most of them that will be true.

Indeed, it will be hard to criticise people like the Park’s for taking expenses or dividends when in fact they have kept the whole ship afloat these last 18 months. Anyway, as shareholders and directors they are fully entitled to recompense.

That’s never been up for debate and anyone in Sevconia who moans needs a lie down.

No, the bigger issue will be those who contributed the sum total of nil and then lied about what they got out of it. I refer, of course, to Paul Murray, the dogsbody for King, the guy who asks “how high?” when the glib and shameless liar says “jump.”

Earlier this week, a minor story about Paul Murray emerged. It wasn’t even a footnote in the mainstream press; instead it was a footnote on a blog. It came from a single comment, on the Scottish Football Monitor site and it was about a brand new app that Sevco fans are being encouraged to get.

The app will send them instant club news; I have no idea what the sources will be, but you can bet they’ll be nothing the club doesn’t want fans reading.

What myself and the poster of the comment found interesting – hat tip here to EasyJambo – is that the app is run by a company – Vicast Limited – which Murray is a director of; in fact, he helped to set it up. This would be intriguing enough – the club granting yet another contract to a Paul Murray company (he is one of the directors of the firm Garrion which provides their stewards; that company is ultimately owned by the club, but it’s a neat way of disguising his remuneration).

This would have my antennae twitching on its own – we have no way of knowing how many other contracts at Ibrox have been awarded to The Friends of The Man – but what EasyJambo uncovered is actually far more interesting; one of the co-founders of the company, and a guy who still has a “controlling interest” in Vicast is Martin Bain.

Bain, as you’ll all remember, was on the Rangers board during the last gasp of the Murray regime.

When he left he did so under a huge cloud; he threatened to sue the club and actually had money ring-fenced for a settlement. Sevco fans erupted in fury when they discovered, during the Whyte trial, that one of the details of his “final settlement” was a pay-off of around £300,000 … a bonus he received when the club was sold to Craig Whyte.

Bain is a hate-figure in their support, and yet here is the current board giving one of his companies a nice wee earner.

It may not be much but it’s a sign of the disconnect between those running Sevco and their fans.

This one was spotted.

How much happening over there slips through the cracks and goes un-noticed?

How much do these people get away with?