Three Deals Which Prove That Sevco’s Transfer Policy Is As Barmy As It Ever Was. 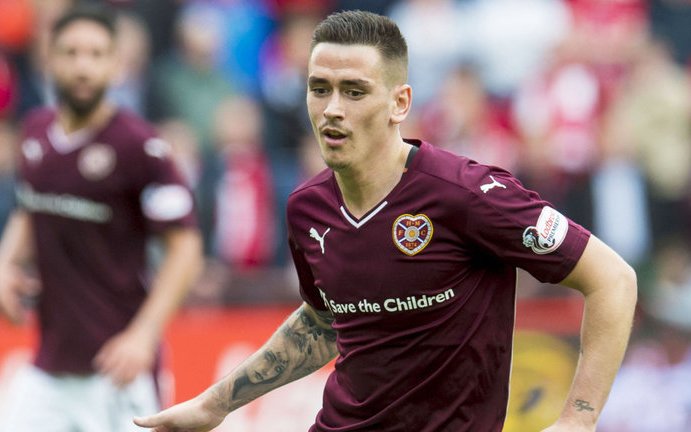 Amidst the outpouring of joy over Sevco’s imminent capture of Jamie Murphy, reputed to be costing them £1 million, there are a couple of bits of reporting that are gushier than a burst urinal outflow pipe. In one, Barry Ferguson hails the signing – and that of Jimmy Nicholl – as a return to the grand old days of yore when only Real Rangers Men strutted their stuff at Ibrox.

It is supremacist, idiotic, manifestly barking.

You expect that level of nonsense from an eejit like him.

You do not expect slobbering sycophancy from journalists at better quality newspapers.

When I read the following headline in The Evening Times today – “Could common sense finally be prevailing in Rangers’ recruitment after capture of Jamie Murphy?” – the name Chris Jack popped instantly into my head.

And I was wrong. This nonsense was actually written by Graeme McGarry.

Hang your head in shame, my son. Cause you dropped a load and a half in your pants here. The article is arrant nonsense from start to finish.

“There has been so much cause to criticise the various casts of dubious characters who have occupied the Rangers boardroom over the last few years that at times, it almost didn’t seem fair to take aim at them. It was too easy, like shooting fish in an oak-panelled barrel.”

All correct, except I don’t remember the media doing all that much criticising of them at the time; a lot of rewriting history has been done on the fly since, of course. Not that it matters. The rest of the article is a litany of “the journey” and all the money the club wasted on players who were past their best, or who came with names but not much more.

Every one of those signings was praised by the media at the time, by the way.

It was the bloggers who called the spending reckless, insane, stupidity writ large. It even casts aspersions on the club for wasting money on Barton and the like … wasn’t he the one Times hacks were falling over themselves to predict would be player of the year before a ball was kicked?

These people must think we are absolute mugs with no memory whatsoever.

It ends with praise for the current Ibrox board, for allowing Murty to spend money.

The same Ibrox board who it now criticises for letting Caixinha spend his.

Which itself is a shocking attempted rewrite of history.

I remember the media’s response to every single one of those signings too; it was as fulsome and optimistic as it is right now with Murphy about to put pen to paper. A handful of bloggers – and yes, I take some pride in being one of them – asked who these guys were, whether they could settle, what was their pedigree … the media dismissed us as jealous cranks unable to handle that “Sevco were back.”

How stupid they look now. Except to themselves.

Now, Murphy is not as bad a signing as those players were. It represents less of a risk. He should, in fact, enhance their first team. But that’s a statement more about their first team than it is about his talents as a player.

The notion that Murphy was “on the brink of the Scotland squad” last season is especially amusing to me; that he couldn’t get into that team of serial failures sounds pretty damning, especially as Strachan was always scouring the highways and byways of the lower leagues of England for new dross to put in the team. If he saw nothing he liked in Murphy it makes me wonder exactly what it was that John Brown saw.

It also makes me wonder, if he’s this great talent, why Celtic never made a move and instead went for a kid at St Mirren who we’ve let stay there for the season.

Let’s get back to that point. It’s a good one.

There are several things wrong with McGarry’s notion that “common sense” has dawned here. One of them is the question as to why a club with a hefty heaving wage bill is spending money adding to it before some of its other elements have been moved on. Pena will return to Mexico, so we’re told; that move will free some money from the wage bill, doubtless, but it’s a disaster all the same and one the media seems very keen to skip over.

Now, I’m not criticising the club for wanting shot of this guy. Way back in the early part of the season I wrote numerous articles in which I predicted that both Caixinha and Pena would be gone when this window closed. I had no doubt about either. The stories about Pena and his social life were rife on social media from the day he arrived; it was no surprise to me that the guy was manifestly unfit and unable to handle the rigours of the game here.

Pena has issues that go way beyond carrying a little weight. Moving to the European capital of hard drinking and hard living was a recipe for disaster, and one that was all too obvious to the Mexican media reps who the Scottish tabloids spoke to in the hope of getting glowing reports; to paraphrase Del Trotter, they pretty much told our hacks that “the only thing glowing about him is his liver.” Sevco signed him anyway, and the media drooled at the prospect.

Taking a neutral perspective – which I am perfectly able to do – you could see that it was doomed and so it proved. But he cost the club the better part of £2 million, and that’s before wages. Even if Cruz Azul take him completely off their hands that’s a loss of monumental proportions. Forget Azul paying more than a fraction of wages; one of their directors spelled that out to the media when he announced the deal yesterday.

“We made a deal and we think it is very favourable for the club and player,” he said.

And here’s what the Scottish press might have missed; the club in question ain’t Sevco.

This also applies to Herrera, who they are offering to every club in the land … and of course nobody is interested. This guy attracted zero attention from Europe when he was playing every week in the land of tequila and tacos; after flopping in the SPL, having barely kicked a ball, how the Hell do they expect to get money for him?

Pedro might well want to take him on loan too, but the terms will be lousy and there’s zero chance that either he nor Pena will move to Cruz Azul on permanent deals. Sevco are paying these guys good wages. Better than Mexican teams can afford.

So eventually, both will return to Ibrox, presumably to sit in the stands every week. Pena already needs more than a standard size plastic chair; how long before he’s taking up two seats with his fat arse? What’s the chances of them punting him then?

No club that was fiscally sane would be making matters worse, but here is Sevco acting like a “big club” on a fraction of the earning power of Celtic. And our own transfer business in this window has been an absolute monument to sanity and discipline.

If the Pena deal stinks to high heaven, and casts a dark shadow over Murphy, what then does the Lewis Morgan deal do? Had they moved fast – fast enough that we didn’t get into the race, because at that point they were beat – they could have had Morgan for a third of what they’ve just paid for the Brighton player. Yes, they’d have had to loan him back to his current club, but that would have been a wise investment in the future.

And that’s the point, because McGarry talks about the once great plans of the Ibrox NewCo; they were going to fill their team with classy young footballers and build a side that would be together for years. Not only that, these players would appreciate in value so that if one of them moved on the club could command a whacking great transfer fee for him.

They hoped this would apply to the signings of Pena, Herrera and Cardoso. He, too, is on the list of players being offered in this window, and the club knows already it will not get near what they paid for him. They just aren’t very good at this “buy low and sell high” strategy.

And this signing is no different, it’s just stupid in a different way.

Even if Murphy turns out to be a decent purchase – and by that I mean makes their team a smidgen better – he’s 28. Give him a three-year deal and he’ll be 31 when it ends. No re-sale value to speak of. Expensive bling, another name on the back of a jersey, his best years in the past.

Instead of that, and for a fraction of the price, they could have opened talks with the boy at St Mirren.

And if they didn’t want to wait half a season to have a young up and coming talent in their first team squad they could have taken the £300,000 to Hearts instead and bought Jamie Walker. He’s about to sign for Wigan, another deal done for a third of the Murphy fee.

Walker and Morgan are in their early 20’s. Both are moving forward in their careers, on an upwards trajectory. Both are going to bigger and better playing environments; they are on a path to greater things and larger challenges.

Both will command large fees if the day ever comes for them to move on.

That’s how it’s meant to be done.

Murphy is not moving forward in his career; this is a step back.

He is returning to Scotland.

Is this a career enhancing move? The papers are full of talk that he could have stayed in England, but where were the offers to? Where was the club or clubs who would have given a Sevco a run for their money on this deal? With prices down there so flatly insane, a £1 million fee would have been seen as a bargain basement price for a guy the press is telling us is a top talent on the verge of a recall to the national team.

For the media to pretend that this deal makes stunning sense when Morgan and Walker have slipped the net and when the club’s transfer policy is manifestly barking … I don’t even know where to start. We also appear to have a club who’s signings are being conducted by different people; the boy who “jetted in” yesterday was clearly not a Murty deal … he admitted on SevcoTV that he hadn’t even spoke to the manager. The papers say this deal is.

Nothing fits. It’s a shambles, just a different variety of one.

The media can pretend not to know this … but they already look stupid for their summer of sycophancy.

They probably don’t think it can get any worse.

But this is Sevco.

It can always get worse.