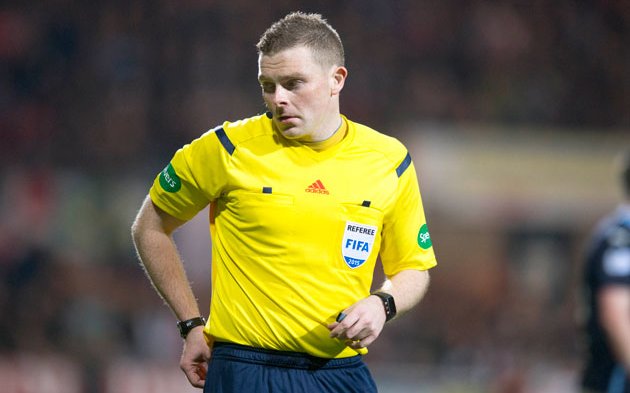 In the aftermath of yesterday’s game, I wrote a frustrated article on how we had nobody to blame but ourselves.

Had our players functioned as a unit, played better as a team, got some shots on target and stuck the ball in the net even once the discussion over what went wrong would be largely academic. That’s football.

But I am not stupid, and I am not blind and I would have had to be both not to have noticed that the performance of referee John Beaton was more than just bad. Bad is a soft word for how it was, and actually might well be the wrong one to use, because in certain circles I’m sure that it was being applauded as just what was required on the day.

I’ve written about Beaton before; in March I penned an article on his disgraceful performance in a match between Hamilton and Sevco at Ibrox. I said that performance was either scandalously inept or simply corrupt.

There are a lot of people, including some who have watched football for the whole of their adult lives, who do not understand what referees actually do. I’ve heard refs described as having had “good games” because they let matches “flow.”

I’ve heard some described as having bad games because they were constantly stopping and calling fouls and bringing out yellow cards.

The first does not make a good ref nor the second a bad one.

A good referee follows the letter of the law.

He does not allow one team to rough-house another which is trying to play football. I’ve watched some of those “flowing” games and they generally involve one team being muscled off the ball constantly, and the ref allowing play to carry on as if fans had inadvertently bought tickets to a Rollerball rink instead.

Alternatively, I’ve seen games where the ref kept to the letter of the law and punished players who crossed the line, and thus ensured that the better team was able to do its business without fear of being kicked off the park.

There is somewhere in between, and those very best refs walk that line.

John Beaton is not one of them. He allowed their players to use whatever means they wanted to stop us getting into our rhythm. He let Davidson away with at least a dozen challenges before he was finally booked for one.

According to the BBC stats, they had four yellow cards and committed 23 fouls in the course of the game, but of course those are only the ones for which fouls were awarded … and yet their yellow card count stood at one – Foster, who should have been red carded later in the game – until the 76th minute, and it stayed at two until the match was in injury time.

This is the strategy, then, and we’ve already seen it in a couple of games this season.

Allow teams to tackle us and escape justice. Allow them to break up our momentum and rhythm every chance they get.

And we better get used to this because it’s how things will be.

Brendan has commented on this a few times, but he needs to keep on doing so and highlighting it, and ignore what our critics say about it.

Our injury problems are partly to do with the treatment we get from some teams … constant tackles, picked up in those kind of environments, can become more serious problems … and that means constant team rotation amongst other things.

Nobody should be saying that refereeing is the reason we’ve dropped so many points; that’s been caused by players making too many mistakes and by us not closing out games. But refereeing is having an impact. It’s having an impact on performances and on the fluidity of our game, and that will, at times, result in games not ending the way we would like.

Blogs can keep on highlighting this until we’re all blue in the face; only Celtic as a club can deal with it, and Brendan and his coaches should be pushing for reform of refereeing and highlighting days like yesterday every chance they get.

Keep it in the spotlight until it changes.