There Is A Real Absence Of Empathy Or Warmth At Gerrard’s Ibrox. That Will Cause Problems. 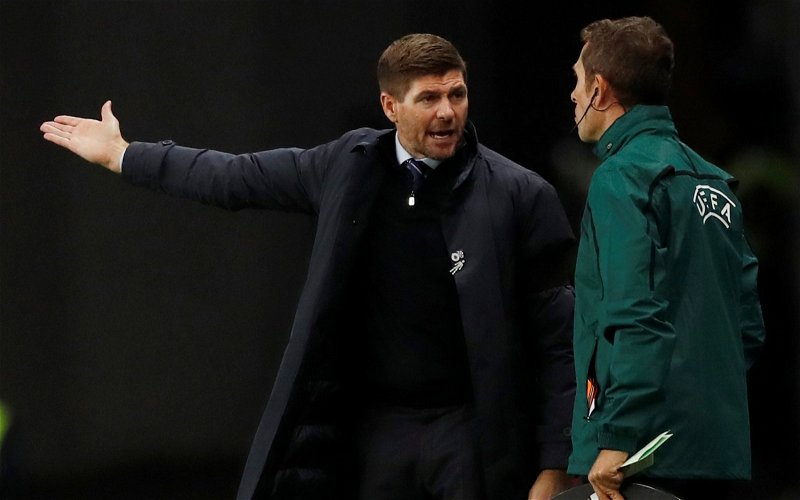 In the last 24 hours, Steven Gerrard has said two things that have made my mouth fall open in surprise.

Is he just too stupid to realise what he’s saying or is he fully aware of the messages he’s sending out? In the end it doesn’t matter; he is advertising an incredible lack of man-management skill and the media is either not picking up on it or ignoring it.

Let’s start with the first one, his comments in the aftermath of Ryan Jack signing a new deal.

Gerrard gushed about the player in his official press statement.

“We’re delighted that Ryan has extended his contract with the club. He … is a real leader and winner on the pitch. Ryan sets very high standards for himself and for others around him and that is exactly the kind of player and mentality that we want in throughout our squad.”

Nothing wrong with that, on the surface of it, right?

But Jack isn’t his leader on the pitch, that’s James Tavernier, a player who is under massive pressure at the moment from his own fans after yet another disaster strewn performance at the weekend. At a time when he probably needs reassurance that his role in the team is not under threat, Gerrard has told the media that Jack is the guy who contains all the ingredients that a leader of his team should have.

And that cannot be read as other than a public rebuke of the guy who wears the armband.

Gerrard’s comments are not ambiguous in the least.

He has talked up Jack’s personal and playing characteristics, has explicitly praised his mentality, and identified him not only as a leader but an inspirational figure in the squad.

You don’t need a decoder pad to work this out.

Even if Tavernier gets to keep the armband, Gerrard has acknowledged Jack as the real captain, and the squad will recognise that as such. Jack is certainly being encouraged to assume the role, whether Tavernier is in that job or not.

This is incredibly bad man management, and potentially damaging.

Because if a manager will treat his own captain like this … wow. Other members of the squad, watch out.

And it got worse today when Gerrard went in front of the media to talk about Alfredo Morelos.

First he refused to confirm that Morelos will start against Porto, even after scoring at the weekend.

This is standard stuff, of course, but it’s when he was asked to elaborate on how the player feels after the incident of racist abuse he suffered at the weekend that alarm bells should have been ringing in the press room about this guy’s methods.

“We haven’t had the chat,” Gerrard said. “Alfredo is fine. He seems happy. My door is always open to any player to speak about any subject but I am not the type who will search for it. Alfredo was fine on the bus after the game … He hasn’t mentioned it to me but my door is always open.”

I was flabbergasted reading that.

The player has suffered the kind of sickening abuse that had players at Haringey Borough weeping on the pitch before they walked off in support of their team-mates at the weekend. The type that Lennon said he would encourage his own players to walk off if subjected to.

And Gerrard never asked him how he was?

Now, don’t get me wrong; Morelos doesn’t come across as one of those players who would require hand-holding, but Gerrard’s comments make it clear that his decision not to ask him wasn’t motivated by his faith in the player’s strength of character but by his own particular management style; in other words, it was absolutely based on selfishness.

“I am not the type who will search for it,” he said.

What the Hell kind of thing is that to say?

I’m too important to go and seek out a player and find out how he’s feeling?

And this is what leadership looks like in the modern game, is it?

I remember the day that “anti-Irish racism” arrived as a spoken thing in Scottish football; Neil Lennon taking horrendous abuse at Ibrox as a player under Martin O’Neill. Neil was coming off the park that day after we’d lost, looking no worse than any other player in spite of having suffered a torrent of vile abuse.

Did O’Neill wait for Lennon to go and cry on his shoulder? No, he grabbed him around the neck and walked him across the pitch to the Celtic fans in a show of support and to remind our current manager that he had the whole Family behind him.

Lennon took more heart from that than if we’d won that game and stuffed the abuse down their throats.

Today the Ibrox club has released a statement telling their fans to behave; I’ll be covering that statement in another piece because it’s truly scandalous, and deserves a larger article, but it explicitly mentioned the Morelos incident calling it “a racist slur against one of our own”.

That statement, as shocking as some of it is, shows an appropriate level of concern for their own player which Gerrard himself has not demonstrated at all.

Leadership that is aloof, that is spiteful, that is petty, that is cold … that is not the kind of leadership which builds strong units and winning teams.

A football squad is a collection of different personalities.

Some need the love and encouragement more than others, and the dynamics of a dressing room have to be managed carefully.

I see no sign that Gerrard is in possession of that particular skillset.

This is not the first article I’ve written on his bizarre and divisive man-management style, but these separate incidents are excellent illustrations of what’s wrong with it.