Why Are Celtic Fans Surprised Rod Stewart Is A Tory? He’s A Brainless Establishment Dolt With Money. 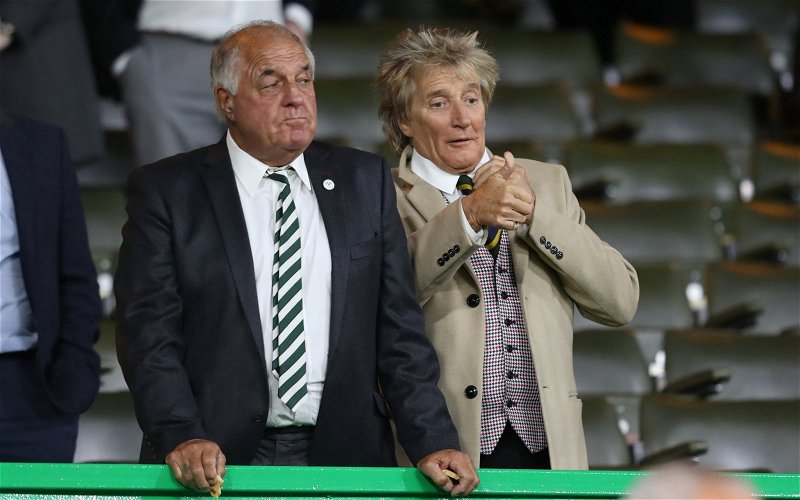 Rod Stewart was a good looking guy in his youth, and he could then, and can still now, sing like his voice was a gift from God.

His is a remarkable talent, and back when I was a growing up I would listen to his music for hours on end.

But we’re not talking about the sharpest tool in the box here and we never have been. Combine that with money, of which he has an almost obscene amount, and a love for a good drink and his picture in the paper and you get a narcissist.

Before we ever got to last night there was plenty in the public domain that should have given pause to anyone who believed the shtick about Stewart being “one of our own.” What does that phrase even mean? A Celtic supporter?

That’s a long and varied list, and a lot of the people on it you would not invite to your Christmas party.

Those who think that his recording of a Republican ballad about the wife of a revolutionary was the proof that some inner rebel burned within have ignored decades of evidence to the contrary. Amongst the ranks of the British glitterati, you would be hard pressed to find a more concrete example of an establishment crawler fascinated by a proximity to power.

It’s Sir Rod Stewart for one thing; quite how that salient detail has been missed by some I really don’t know.

Not many “Republican sympathisers” have that title, I’ll bet. He got his knighthood in 2016 following his CBE in 2007, where he gushed about how this is the country that “honours the common man” whilst blithely ignoring that the honours system itself and those who sit at the top of it dishing out the baubles is a grotesque and anachronistic throwback.

What the Hell does he care? The idea that he was a “common man” by then is ridiculous.

Stewart hasn’t had to slum it with the ordinary punter in years.

In a series of articles three years back he talked about his friendship – his close personal friendship – with Donald Trump. He glosses over it by saying he doesn’t agree with his politics … although he never goes much deeper than that, and to be blunt he doesn’t have to considering that we know Trump is an arrogant bully, a racist, a misogynist, an equal opportunities bigot who will probably end up spending the rest of his life fighting state and federal indictments for a variety of crimes.

Stewart’s brief forays into politics before were straight-up-all-out adverts for the establishment view.

He opposed Scottish independence in 2014 before flipping to favour it “if it benefited Scotland” but mourned his precious Union Jack.

He supported EU membership, and a second referendum, saying that he believed the country had been “lied to.”

Yet last night he tweeted his congratulations to his big pal Boris, the biggest liar of them all, the man whose mendacity led the country to disaster and him to Downing Street. Stewart clearly has no real interest in political issues or he’d know the role Johnston played in telling those lies and in stoking the fear and hatred that the far right of the Tory Party just capitalised on.

Rod Stewart is a man who has taken gaudy little prizes from the Queen, who has cozied up to famous, rich racists and who has made sure he’s in good with the immigrant hating government that has just been elected to haul us out of the EU.

If independence were on the table tomorrow it’s a sure fire bet that he would oppose it, wrapped tight in the old Butchers Apron, standing on the platform as Johnson and the rest of his establishment “friends” who see him as a useful idiot.

He started out an Arsenal fan, became a Manchester United supporter and is now a devout Celt. He has railed against lies and liars and endorsed the author of the worst of them as leader of the country. He opposed independence until he didn’t and would almost certainly flip back the other way. He wraps himself in the tri-colour but feels just as at home in the Union Jack. He recorded a Republican ballad but bent his knee to the Queen. He endorses the mission statement and ethos of this club but cosies up to the scum of the right who oppose it all.

Rod Stewart doubtless sees no contradiction in any of those positions. It’s partly because he has the luxury of never having to worry about the consequences of a Tory government or of leaving the EU or of Scotland stayed tied to the union, and the thing is, none of this was ever a secret. He was bigging up Johnson last month, saying he was the perfect guy to “sort Brexit out.” His royalist, establishment sensibilities are worn on his sleeve.

I have strong opinions on the tweet he sent last night, but I don’t care much for him anyway and knew his politics from way back. This is a brainless dolt, just another London-centric celebrity with too much money, removed from exposure to the real world.

His congratulatory tweet last night was loathsome, but not the least bit surprising.

We have Tories on our board of directors. We allowed Ian Livingston to stay on the board after he cast a vote for austerity; many of us thought he should have been forced to resign for that and our club chairman called us bigots for expressing that view.

Many of us took our own individual decisions about this board and their leadership that very day, just as we can all decide not to buy Rod Stewart’s stuff ever again.

But some of us haven’t for years anyway.

That he has irredeemably burned his bridges with a lot of our support with this action is absolutely beyond question though, and every act of this immoral government will simply make that tweet look worse and worse.

At some point we’ll get a mealy mouthed explanation, but it’ll be more of the same bollocks he came out with over Trump.

It’s all white noise. As he’s never hidden what he is I don’t feel any great shock or betrayal in this naked reveal.

If he couldn’t sing, he’d be just another “commoner”, just another working class guy telling jokes down the pub.

Look how a lot of them voted this time around.