John Barnes Blames Racism For His Celtic Sacking. That Is A Ridiculous Claim. 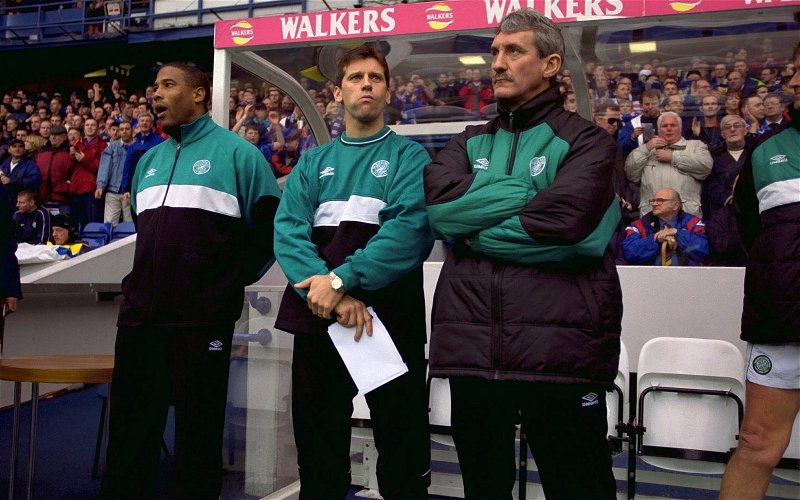 With the national conversation focussed on the Black Lives Matter campaign, it was inevitable that something like this would come up.

John Barnes has blamed bigotry for his sacking at Celtic Park.

This isn’t the first time he’s come out with this crap … I wrote about this back in 2015.

I understand why Barnes wants to highlight the issue of racism within football, but this is revisionism of the very worst kind, and it’s insulting to our club as well.

Barnes’ comments are plainly nonsensical, and even when he is onto something he makes the mistake of trying to see it through the prism of racism.

I’ve heard him talk before, for example, about the unremitting hostility there was in the media towards his appointment; he blamed that on the colour of his skin. In fact, it was the colour of the jersey that the hacks had a problem with.

The same pressure was applied to Wim Jansen and Jo Venglos, his two predecessors, and more recently to Ronny Deila.

You need to be made of strong stuff to take the Celtic job because the press is against you almost from the first, and if you can’t handle that you’re already in big trouble. The slightest sign that you are not up to snuff – and with all three of those other men the hacks had decided that before they had even managed a game – and the vultures start to circle.

Barnes should never have been near Celtic Park, and I write that as someone who was equally appalled when we appointed Lennon the first time, with zero managerial experience.

I still think that cost us the league title in 2010-11; the learning curve was just a little steep for him in his first full campaign.

For a club like ours to appoint someone totally untested in the managerial arena was unconscionable. I have written the same about the lunacy of Sevco appointing Gerrard.

The media would never have let us get away with that appointment either.

Every headline would have been about what a risk it was.

Barnes said that the Celtic fans were never behind him because of an unconscious racism; what absolute cobblers that is.

He was the subject of widespread media derision, at a time before the bloggers, when all our supporters had to go on were the reactions of the press.

Even without such a firestorm against him, most fans were deeply troubled at the decision as it was clearly an enormous risk.

Barnes was woefully out of this depth, and nothing encapsulated that better than the game which sealed his fate, the Inverness game at Celtic Park which saw us exit the Scottish Cup. His complete lack of control over the dressing room, which had been rumoured, was fatally exposed, and his lack of a tactical plan B was ruthlessly exploited as well.

Barnes maintains that other managers would have been given a chance, but this is ridiculous.

Venglos, who was his predecessor, was let go at the end of his first campaign; we played some amazing football in that one, including trouncing Rangers 5-1. Macari didn’t last a full season. Neither did Mowbray. Christ, we let Ronny Deila go after two and he won the league in both.

The whole direction of the club was just wrong at that time, and the disastrous Dalglish-Barnes season was to provoke a momentous rethink of the whole setup, which led, of course, to the appointment of Martin O’Neill. We have never looked back.

Barnes was a magnificent footballer and has been a genuine voice on anti-racism campaigns through the course of his career.

But he’s been coming out with this nonsense for a long time now, and using it as a cover for his own lack of success in the dugout.

Celtic was the biggest job he ever have.

No other major club gave him a look-in; were they all guilty of racism? Or is the explanation simpler?

That Barnes was just never up to snuff, that his appointment was sheer folly, that he ought never to have gotten the job in the first place?

It was obvious then and it’s obvious now.