The Bolingoli To Roma Story Has Shell-Shocked A Media Who Wouldn’t See A Player There. 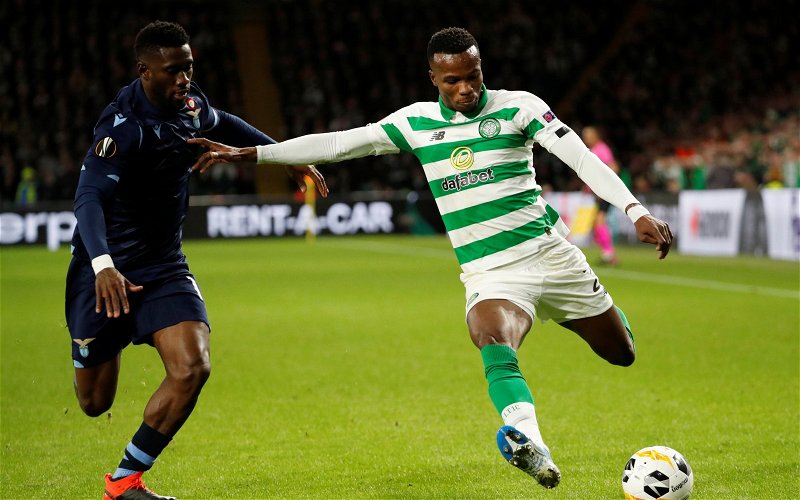 Before he blew up his Celtic career, I would become frustrated, even angry, with people who were ready to write Boli Bolingoli off as a footballer.

I thought his initial nervousness at our club was entirely understandable, and believed then, and now, that he would have grown into the jersey as so many other footballers we’ve written off have.

Even the greatest footballer to wear the Hoops of my generation, Henrik Larsson himself, needed time to settle in at the club.

The number of others who have required more than full season is vast.

So too are players who were entirely unappreciated by our fans whilst they were here and who’s contribution can only now be recognised clearly for what it was.

A case in point in Georgios Samaras.

As my friends will confirm, I was a fan when it was unfashionable. I thought that when he was at Celtic Park he was the best technical player at the club and in a different league where his skills were more appreciated he would have been a star.

When we finally moved him out wide left he excelled; I can only imagine what he’d have done in a Brendan Rodgers team, in the 4-2-3-1 which become the staple of that side.

I never write off a Celtic player until I’ve seen him enough times to be convinced there is absolutely nothing there. I never, ever saw that with Bolingoli.

There is clearly a very good technical footballer, and especially bombing up the wing.

If he showed a certain nervousness at times that was only the natural consequence of being at a new club in a league where he wasn’t afforded the same time on the ball as elsewhere. At no point did I believe we were watching “a dud” and I do not believe it now.

This week, I’ve been writing about how the press is clearly attempting to put pressure on Duffy before he’s even in the door.

Before Ajeti had kicked a ball we had to read articles about how he had flopped in England.

The media will do anything to destabilise the relationship between our club and the fans and one of the best ways to do it is cast doubt on the players … and I have never seen a more obvious example of it than with Bolingoli.

From his earliest games the hacks had decided to target him, and I very quickly realised that’s what they were trying to do.

I begged our fans not to buy into it.

I knew that if the idea took hold that he was a bad buy that it would stick to him like glue, amplifying every mistake he made, leading to even more negative coverage and a downward spiral.

Some of the early coverage, even from people like Sutton, was manifestly absurd as the player had barely featured for us and was obviously still settling in.

He also had the shadow of Kieran Tierney over him, and I had long argued that this was an impossible burden for any player to carry, much as the shadow of Larsson loomed over so many forwards.

I believe the media did its job on Bolingoli very well indeed.

Some of the stupider hacks, those who don’t know the first thing about the sport they are supposed to cover – the BBC and the news desks of our mainstream press are full of these folk – may even believe it.

That’s why the news that Serie A giants Roma are interested in taking him off our hands has resulted in such disbelief amongst the press corps.

It is especially amusing to me, as The Rumour Guy said yesterday, that they are interested in one of our “fringe players” whilst a certain other club struggles to get rid of the best members of its first team squad.

Now, this deal may happen or it may not happen but Bolingoli is done at Celtic Park and most of us would probably agree with that … but we will get a fee for him when he departs, and he will go somewhere and prove himself a very good player.

There’s a reason none of these folk work in the scouting departments for major football clubs though.