Dr Jo Venglos: A Better Man Than Any Of His Anti-Celtic Detractors. 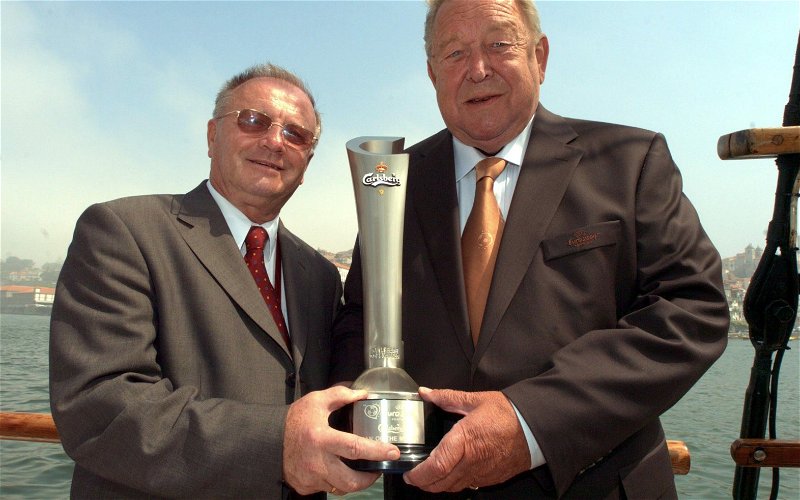 The death yesterday of Dr. Jo Venglos has united the Celtic support for the first time in many weeks, and the tributes have been flowing in from everywhere, from every quarter of the fan base and from wider football. He deserves all of it, and more.

There must be people in the media who are watching this go on in genuine bafflement as we honour a man who was at the club for one year and won nothing at the same time as most of us clamour for the head of the current incumbent.

They will just never get it.

Not everything comes down to trophies and titles; Celtic fans admire and respect enormously this man who graced our club with quiet dignity and blessed it with knowledge and insight.

There cannot be many men who have had our job who were as genuine and decent and courteous than Venglos, who arrived in Scotland to some of the most scandalous headlines I have ever seen in my life.

All involved should be ashamed of it to this day, if that is they were capable of shame. To call it disgusting understates how abysmal and cynical and downright nasty it actually was … but it was all part of the pattern we’ve come to recognise.

The year before, we had hired Wim Jansen to easily the most grotesque headline ever associated with our club where he was characterised as “the worst thing to hit Hiroshima since the Bomb.”

Venglos’ treatment might not have seemed on that level, but in many ways it was far worse with the media painting him, from the off, as a doddering old man.

But Venglos knew more about football than these people would learn if they lived ten lifetimes. He was titled, published and highly intelligent about the sport and everything in it.

Our pig-ignorant hacks said he was a throwback to another era without studying a single thing that he believed in; in fact, he was from another era, but it was the one we’re living in right now because his ideas about diet and fitness which so offended the British sensibilities at Villa and then with our equally ignorant UK grown footballers were miles ahead of their time.

They say people always fear what they don’t understand; had our media treated him with the wary respect his ideas deserved, that would have been one thing. But they shamefully made their contempt for those ideas, and the man himself, crystal clear every chance they got.

I remember the day of the Rangers game at Celtic Park when we massacred them and Jo Venglos’ full knowledge came to the fore in the most memorable way.

On the way to the game that day, I remember being furious when I heard the line-up.

I didn’t understand the system at all.

But in second guessing him, that was a joyous example of being absolutely out of my depth and having to later admit it. Because Venglos knew exactly what he was doing, of course.

To hear him and his assistants talk after the match about how they had analysed the Ibrox club’s previous games and plotted, meticulously, the style of play we’d use against them, was one of the earliest educations I ever had in what it is that great managers actually do. It was to be his finest hour with the club; it remains one of my greatest memories of watching us.

It was one of those days when everything just slotted into place though.

For weeks, Gattuso had been rampaging through the league kicking and snarling and scaring opposing teams into submission; early in that match another new boy, Johan Mjallby, sorted that nonsense out by almost literally putting the Italian ned up in the air.

He didn’t get a sniff all day.

It was all so clearly well thought out … my respect for Venglos grew and grew after that, and especially as it became clear that the 33-year-old he’d bought us, and who had suffered his own abysmal media welcome, was a bona-fide superstar who would light up our footballing lives for the next handful of years. Oh what that we had gotten him a little sooner.

More than his tactical nous, the genuine warmth of Venglos was obvious to everyone who met him and got to know him.

Fergus McCann was a man notoriously difficult to please and who didn’t like most of the people he met; he regarded Venglos as one of the sharpest and professional individuals he’d ever worked with, as well as one of the most courteous, and desperately wanted him to stay on as manager.

But Venglos was not a guy who stuck around any post too long, and he was probably heartily sick of the media.

He also knew that some of his more radical ideas weren’t going to go over at Celtic, where like the rest of British football we were still miles behind the standards he foresaw in the game. He would later go on to become the President of the European Football Trainers group, where he took his ideas on the road and probably influenced many clubs.

Celtic itself gave him a roving commission as one of our European scouting heads; one of the first players he recommended to us was a Bulgarian named Stan Petrov.

He clearly had an eye for a player; I struggle to think of a bad signing that he made.

The colossal ignorance which surrounded him can be summed up by one of the players he gave a debut to; Mark Burchill.

Burchill would know better if he was even a quarter as smart as he thinks he is; his own introduction in the 5-1 smashing was as well thought through as everything else Venglos did that day.

It is emblematic of the stupidity of so many people in our game who just didn’t get what Dr Jo was trying to do, even when he was doing it right in front of their eyes.

The Daily Record’s headline on the day he was hired, “Celtic Sign A Blank Czech”, was an exemplar of the media’s own scandalous coverage of everything the Slovakian did.

The last word in the article deserves to go to another of our maligned and misunderstood employees of that time, Jock Brown, who gave Venglos the most fulsome praise.

“What a smashing guy he is,” Brown told the Celtic Underground podcast in 2014. “I’ve said it before and I’ll say it again, he is the finest man I have ever met in my life. That’s quite an accolade. The most decent, honourable, full of integrity, warm, friendly and supportive.”

Quite the accolade indeed, and so say all of us.

You are remembered, fondly, by everyone connected to our club and you will have a special place in its collective memory, as long as Celtic is standing.