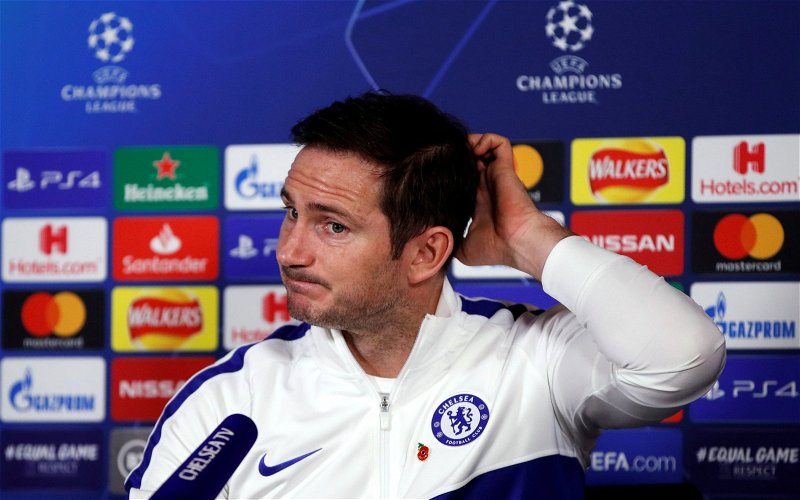 It was as predictable as it is depressing.

No sooner was Frank Lampard sacked by Chelsea than all the candidates we would have most liked to see at Parkhead are linked with the job there. Who says you get no movement on managers during the January window?

Some blogs would have you believe this is the wrong time to be looking for a new boss.

They’ve missed the short-list which is all over the net.

Chelsea will end up with one of the names on our list.

They aren’t going to mess about any more than they have messed about in doing the necessary.

Club icon? Title winner? Too bad, so sad, but the institution comes first.

Hero to the supporters? Big deal, that won’t get in the way of making the changes that are needed to take the club forward.

They’ve shown us how it’s done.

But then Ross County already had on our own doorstep and there are dozens of examples from all over Europe which we could have taken onboard if we wanted a lesson in the simple act of how to fire somebody.

And yes, the next part is as predictable as it is depressing as well.

Already the bookies have Lampard as second favourite for the Celtic job. I mean, Jesus wept. That’s a development which actually chills me to the bone.

Now I don’t believe that bookies odds can tell you much, except that on the night before Rodgers went to Leicester I knew in my blood that those stories were true because he’d gone to 1-11.

That wasn’t some big rash of bets that pushed those odds out there, it was solid information that it was a done deal.

None of our managerial prospects has ever tipped the scales that far.

Indeed, all the candidates who have trended at the bookies so far did so because of the volume of bets, not because any one person had it in solid gold. So I pay no heed to Lampard’s elevated position; this is just the industry getting its ducks in a row and trying to attract business.

No, what I’m rebelling against is the certainty of articles and “analysis” on why Lampard would be a good choice for us. All of it boils down to one thing and one thing only; the “box office appeal” of him going head to head with Gerrard.

In other words, it’s some football writers wet dream.

Two of England’s best midfielders ever?

Going to head to head?

In Glasgow, by God?

At Celtic and “Rangers”?

This is Old Firm Inc.

And what worries me is that I think that might have a certain appeal within our boardroom.

They can smell the money and the interest from England dripping all over this.

They can imagine the phone ringing off the hook as sponsors start flooding back to our game.

I’m just not sure that it would ever dawn on them to think of the impact on our club, on our squad, on our supporters, on our aspirations, on our ambitions. I’m just not sure that anyone at Celtic Park would think beyond the enhanced media interest to the actual playing of actual games which I suspect is where the wheels would fall off of this dreadful idea.

Celtic’s next appointment has to be absolutely spot-on, ticking all the boxes, done for all the right reasons.

It can’t be part of some marketing gimmick or ploy or means of selling a discredited, and defunct, brand all over again no matter how appealing that idea might be to some of the folk in our boardroom.

Lampard is a non-starter.

Celtic fans need to be given inspiration and hope … not sickened to our stomach by another botched job, another inexperienced punt, another third rate option.