Rodgers Reputed Payoff Package Is Why He Left Celtic For England. 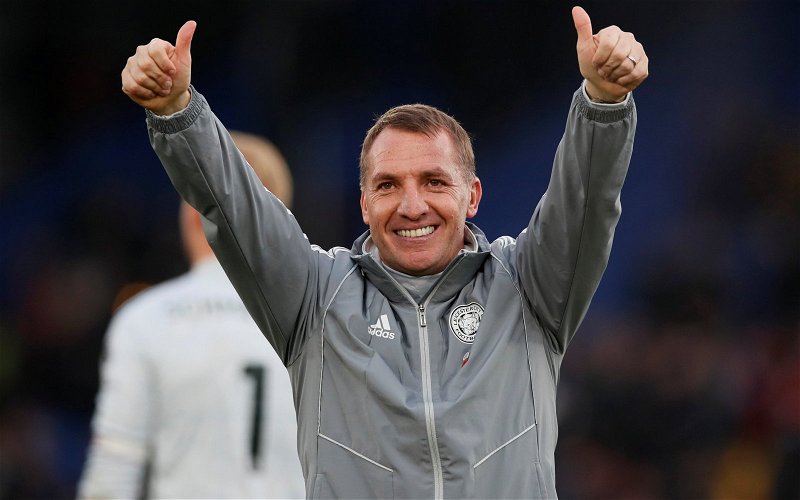 This morning I read with open-mouthed amazement that Brendan Rodgers expects to walk away from Leicester with £18 million if they sack him. What an extraordinary number that is. It seems that the higher you rise in this life the greater the reward is for failure.

All of us have been sacked at one time or another. Most of us didn’t get one last lunch in the cafeteria let alone a gigantic last pay-packet. It is crazy to think that a club like Leicester, which this summer couldn’t sign players, is going to reward this guy – who has spent a fortune as their manager and is part of why they’re in financial trouble – like that.

But this is the reason he went to England in the first place. This is why he couldn’t wait to get back there. We can talk all we like about the spotlight and how much he loves being the centre of attention, but in all honesty he was getting that in Scotland like he was never going to get it at a club which has limited horizons and ambitions.

He probably did believe Leicester was a springboard to a top five club. That dream lies in ashes along with their hopes of hiring a game-changing boss who would propel them forwards. Sitting rock bottom of the EPL does not suggest that it worked.

But in the end Rodgers wanted a move to England for the same reason that most of the players who go there do. They can kid themselves and the fans by talking it up as “the best league in the world” but what they really mean, of course, is the richest.

Every player who ever left us for that league has framed it in terms of ambition. Ryan Christie is so sensitive to the idea that he left us for Bournemouth for something other than huge wages that he constantly bangs on about how he’s living the dream; I daresay he is, but his days of winning trophies and titles are most definitely over.

Rodgers trotted out the same. He left Celtic because we couldn’t go that extra mile to compete with the giants of Europe so he went to a team in a league full of super-clubs where competing was … realistic? It’s a joke and it’s always been a joke.

He went because Brendan has gotten very fond of money and the high life and he knew that he could go to England, treble his wages and at the end of it walk away in the event of failure loaded down with more wealth than most of us can imagine.

That’s what failure looks like to the likes of him.

Yeah, his reputation as a manager will be damaged if their club ultimately fires him … but £18 million for essentially getting most of everything wrong … well that’ll ease the pain somewhat I’m sure.