Jack Ross And Hibs Are Mugs To Accept The Media’s Patronising Pat On The Head. 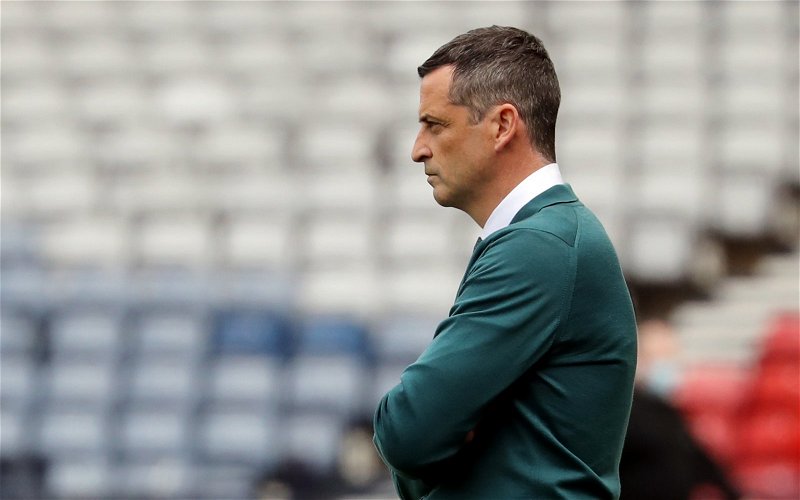 But not to worry, because the media is stepping up to talk about how good they were, and how unlucky, when the story of the day is one of outright robbery.

The narrative seems to be “let’s not question the decision too much; enjoy the moment, although you’ve not even got a point. You did quite well.”

This is patronising to the nth degree and if Hibs accept that wee pat on the head instead of demanding an explanation for that appalling decision they are fools to themselves.

The competition for European places will be fierce this year; if they lose out by a single point are they going to look on back on that decision today as a major one?

This is what teams get now instead of basic refereeing fairness.

A media which tells them “better luck next time” and then shuffles them onward like sheep in a pen, being led to the knife.

Scottish football has some truly gutless individuals in its boardrooms that they’ve allowed this rancid SFA system to get away with this for years without reforming it.

Our own club, by the way, has no excuses either because we’ve been every bit as lax in allowing these people to get their way for so long.

Lawwell famously told a Celtic AGM that the club was content with how the game in Scotland is run.

Mind you, he also denied seeing the Five Way Agreement, so maybe we shouldn’t just assume that he meant that.

Too many clubs do meekly accept this stuff, only sticking their heads up briefly to moan when things go against them, and then invariably they hint at a “pro Glasgow bias”.

But if they genuinely believe that, they do precious little about it.

If they wanted reform, if they were serious about tackling perceived bias in Scottish football, they might be surprised to learn that they would have Celtic fans in their corner … or don’t they know that we’ve been calling for the same thing for years now?

Hibs have even allowed Gerrard to slander their player today, by saying that Porteous “has previous for this” and accusing him of a reckless challenge that could have ended Aribo’s season.

But the only thing Porteous has previous for is being on the end of dire refereeing decisions against that club, and Ross and Hibs should be saying that loudly instead of letting their defender get kicked from pillar to post.

“He gave the referee a decision to make,” Ross said instead. Aye, a decision about whether to wear the full sash at the Lodge later or a Castore training kit. The only thing going through Walsh’s mind seeing that was “how fast can I get the red card out?”

He slammed his own players for conceding soft goals, but took no heed of the fact that they were exhausted having to make up for a missing man; had Porteous been on instead of the decrepit 36-year-old Darren McGregor might things have been a bit different?

The loss of their star man at the back cost them at least a point.

And that loss was a direct result of a red card from a challenge Ross says he didn’t even think was a foul when he saw it initially.

I’ve watched it ten times and I still don’t; the guy wins the ball, as clear as you could get.

But not to worry, because “sympathetic” hacks are lining up to tell Ross and his team how well they did, how it was a case of “nearly, and hard lines” when the focus should be on another deplorable call from a Scottish whistler.

Well, if Hibs are bought off by that Hallmark sentiment then more fool them.

They should be raging tonight instead of “taking it on the chin.”