Our Big Greek Striker Can Be Celtic’s Hero Tonight … And He Showed It On Saturday. 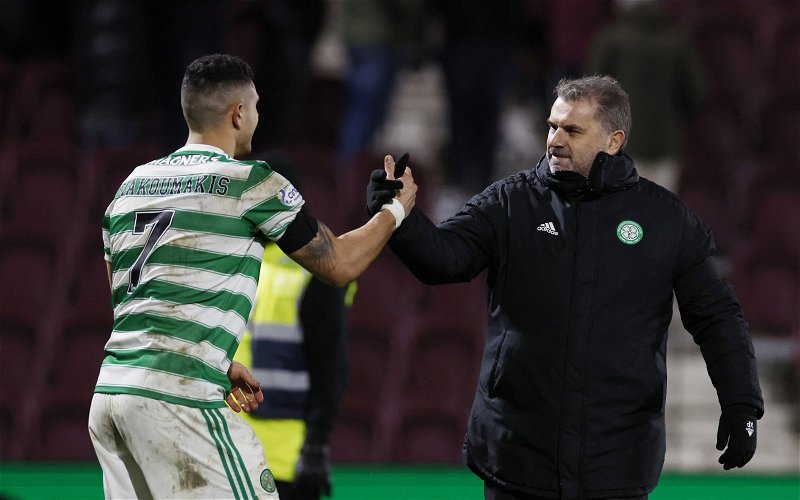 An intolerable trend amongst our supporters reared its head again at the weekend; the writing off of a football because he had “a bad game.” When in fact he didn’t have a bad game at all.

Giakoumakis, in fact, did almost everything right.

Everything except score a goal.

But I remember reading years ago about a scout who went to see a now very famous striker who missed chance after chance after chance in the game. This guy wasn’t dissuaded by that. In the end he recommended him to his club, who signed him and the rest is history. Know what the striker’s name is? Zlatan Ibrahimovi?.

There is a logic behind that story which has always fascinated me.

He was clearly a great player, but what made Ajax spend money on him, to bring him from Malmo, was his attitude and his style and his arrogance and something important which most people missed at the weekend; like Giakoumakis against Utd, the Swede got himself into all the right positions in front of that scout. He kept on finding that yard of space.

And eventually, strikers start putting those away, because this is what marks out a natural finisher from a lesser striker or someone shoe-horned into the position; he can find that edge, he can get in front of the defender in that one moment where someone else’s instincts wouldn’t even fire.

If you really watched Giakoumakis on Saturday, you saw he did that.

If you showed up with a preconceived notion of who he is and what his value to the team is, based on the Livingston game and reports about what a waste of a jersey he was, you saw what you wanted and expected to see.

But I watched more closely and saw something that made me smile.

Given enough chances, this guy will score a hatful of them, and like any striker once the goals start to flow they will just keep on flowing.

Tonight is a massive night for the big lad, and a great chance to set himself up as a contender.

One of the key things any striker is taught when he’s going through the process of learning the game is that the crucial thing is to keep getting into scoring positions.

When our big Greek stops doing that, then, folks, that will be the time to write him off.

I think you’re going to enjoy yourselves watching him this evening.