The Mystery Of The “Ibrox Fan Group” Which Speaks Out Against Bigotry.

Today an “Ibrox fan group” spoke out against the singing, at the weekend, of the hateful and racist song The Billy Boys. 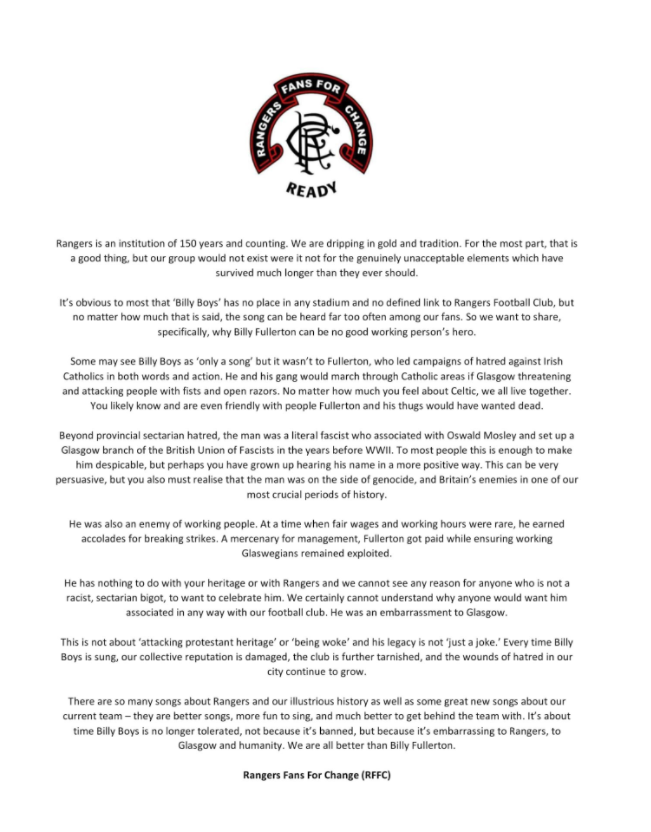 Their statement was sharp and to the point, and under normal circumstances this would be a subject for applause.

For the record, I agreed with nearly every word of it.

There’s just one problem; nobody is 100% sure who any of these people are, or if they even exist.

Phil Mac Giolla Bhain has long suspected that they are nothing but a stunt by the Ibrox PR department itself … and in a way that makes perfect sense.

Phil has another piece about that song – and this fan organisation – up today; he hits on a very important point in that article, and it’s something I’ve talked about myself.

The evolution of the Ibrox support from one awful, virulent form to another.

As he points out, no sooner was The Billy Boys banned by UEFA than The Famine Song sprung into life.

It was replaced by repulsive songs celebrating the deaths of Lisbon Lions and others making libellous allegations against various figures from our history.

Just when you think you’ve eliminated one disgraceful manifestation of their hatred, another comes along.

Their support is now sinking deep into right-wing conspiracy theory and dark politics, and their club follows suit with the appointment of an Ulster loyalist as a media spokesman, and his elevation, last year, to the board of directors.

Phil is convinced that this is a PR put-up job by an Ibrox board which cannot, or will not, tackle this problem head-on.

Its purpose is not to fix the issue but, as he eloquently puts it in the context of Murray’s own efforts in the past, it is “to control the reportage.” This is out there in case any of our enterprising – haha no laughing at the back – hacks actually takes this issue on; they will be steered to the “fan organisation” which is taking a stand.

I wish I believed that there was a dedicated organisation amongst the Ibrox supporters, committed to rooting this issue out once and for all.

I wish that such an organisation was given proper support by the club, instead of their pandering to the lunatic fringe, and in particular the consideration given to some of them as “official media partners.”

I wish I thought that there was a serious chance that an organisation like this would grow out of their support and shame those who remain silent to speak out, but I have my doubts, as Phil does.

What their club – and this country – needs is for the “official” fan groups to speak up … but I don’t believe they have the stomach for it, even if they had the will … which I see no sign of.