Any Hack Wishing Sevco A “Happy 150th Birthday” Is Knowingly Pushing A Lie. 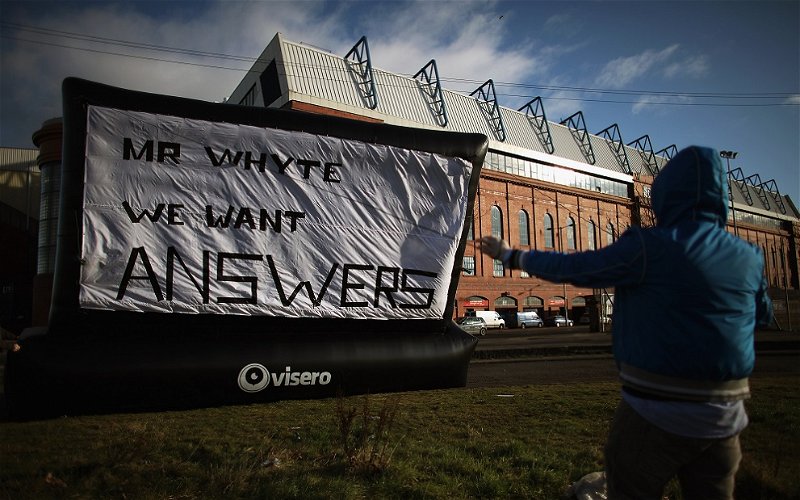 Matthew Lindsay of The Evening Times used his article on their game today to wish the club a happy 150th birthday, trotting out the continuation nonsense as if this were a fact and not a toxic fiction which afflicts this whole sport with even more dangerous stuff.

Their club went out of its way today to play up the “anniversary.”

They do so aggressively, as if trying to convince themselves as well as the world.

Deep down they know better.

They know what liquidation is and what it means. They said so at the time and were completely willing to accept the reality of it when they were still convinced it wouldn’t happen.

In spite of all the wilful denials of that reality, their club and all involved were liquidated.

All talk of them being “relegated” has forever ignored the simple fact that there was, and is, no mechanism in the rules for relegating a team because of debts.

This is why it is important to break this Big Lie into two separate strands; one I call the Survival Lie and the other the Victim Lie … both are equally important, but the second flows directly from the first.

Because if they someone did survive, then that means everything that happened to them thereafter violated all the rules of football governance.

Funny then that a club so prone to litigation never sued over it, either at the time or since.

Funny, then, that they didn’t seek court injunctions to prevent this diabolical plan from being into effect.

Funny then that all this talk of survival only came after Charles Green started banging that drum in an effort to get their season ticket money … a fact the Aberdeen fans were keen to remind them of today with their “Charles Green had a dream” banner.

I don’t care, and never have, what ridiculous lies Ibrox tells itself.

They can live in that parallel universe as they like.

I do care when I see the mainstream press – whose job is to write the facts and tell the truth – repeating what many of them know to be an utter falsehood.

We do not live in Putin’s Russia here where talking out of turn gets you punished and even thrown in jail, so why do so many of our hacks go along with this rancid garbage?

We know that some of them are gutless.

We know that some of them are useless.

But to spend years pushing something so obviously fictitious as this … to me, there’s no more debate on this being a new club at Ibrox then there is about gravity or the world being round.

Rangers was refused a CVA. The new club – at the time everyone, from Walter Smith to some of these same national titles called it that – started from the lowest rung of the ladder.

Anyone pushing this 150th anniversary nonsense is participating in a farce.

And everyone involved knows that’s exactly what it is.

If they want to whore themselves to Ibrox, they are free to do so but they should not be putting this fiction into the public domain.

If they do they have no business whatsoever calling themselves journalists.