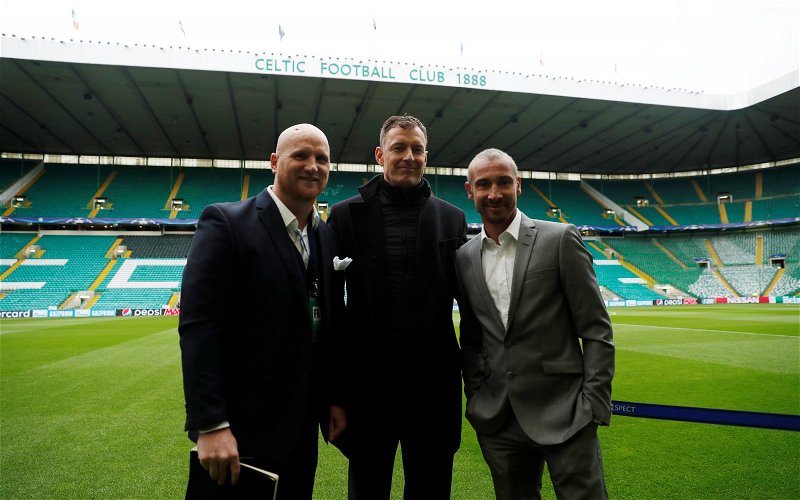 On Monday night, I enjoyed, immensely, a cracking night at the Hydro in which the Magnificent Seven, big John Hartson and Chris Sutton were the front line guests.

Martin O’Neill, to me, stole the show as he was the funniest and most articulate of the additional stars, by far. He laughed and joked all night with his former charges and the respect they have for him is clearly immense even years after the fact.

All in all, I thought it was a very entertaining experience.

One name was mentioned several times, but never showed up. And not that long ago, not only would he have been expected to show up but it would have been unthinkable for the night to have taken place without his being there.

Indeed, even as it was, the whole night seemed a little odd without him.

I refer, of course, to Neil Lennon who was in Seville, who was Martin’s blue eyed bhoy and who captained the team and went on to manage the club. His absence was like the elephant in the room.

When I heard that in addition to Larsson, Sutton and Hartson that Thompson, Petrov, McNamara and others were going to be there I couldn’t imagine that Lennon would not be.

But you know, at the same time I couldn’t imagine that he would be either and not just, of course, because Thompson’s book had just come out and contained some very unflattering stuff.

What kind of reception would he have gotten? Well there was a ripple of applause in the room every time his name was mentioned and whilst I wouldn’t have given him a standing ovation and a lot of others wouldn’t have either nor do I think anyone would have been pissed at him enough to boo and thus impinge on what was an excellent Celtic Family night.

Had Lennon showed up and took his place on that stage he would have been reminded that this support isn’t comprised of the sort of people he seems to think.

More than that, he would have had an opportunity to lay aside some of the hurt and bitterness which does exist from last season by taking a moment to simply say thank you to the fans for all the support that they gave and offering to us the long-awaited apology we’re owed for his own role in the disaster.

Had Lennon done that the entire night, aside from being a great occasion, could also have played a cathartic role, and myself and many others, I’m sure, would have found that a great relief and been grateful to him for it and keen to move on.

I think it was a wasted opportunity in that regard, and although that does not take anything away from what was an outstanding night with some good friends and a reunion with the best Celtic side I saw growing up, and a reminder of what makes this support and this club special (not that I need those but it’s good always to have that affirmation) it makes me sad that it could not also have brought us some of the closure to this painful episode that we require.

Look, it may well be that Lennon would have shown but was never invited.

It may well be that he was invited but didn’t show.

I find the second easier to believe than the first because I cannot imagine those guys having wanted to be there if he was excluded somehow … all I know is that if he’d come along there would have been a tense moment when he took the stage but that he could have changed it all in an instant by saying the words so many of us need to hear.

All in all though, it was a wonderful night.

The good humour and great stories were only a small part of why I enjoyed it.

It was just a great Celtic experience, one of those nights that is all about us, about who we are, where we’ve been and a glimpse of where we might be going.

That said, when I asked my brother in law later if he thought in twenty years’ time we’d all be back there for a show starring Bolingoli, Mikey Johnson and Albian Ajeti he did sort of roll his eyes … he clearly thinks that’s as unlikely as I do.